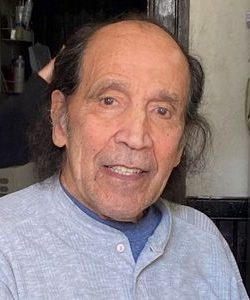 Raul was born February 26, 1931 in San Juan, Puerto Rico, son of Rosalina (Osorio) and Manuel Montero. After graduating high school, he joined the United States Army, based out of Camp Kilmer, New Jersey where he earned a Bronze Star during the Korean War. After an honorable discharged in 1953, he worked at several bakeries for many years before retiring from Widoffs Bakery.

Raul was a fun, loving and vibrant man that worked out faithfully every day at the YMCA. He was a devout Catholic and an active member of Our Lady of the Angles Parish for many years. In his free time, Raul could be found traveling, swimming in the ocean, gardening or trying his luck at the casino. He was also an avid fan of the Boston Red Sox and New England Patriots.

Mr. Montero is survived by his daughter, Melinda Meschke wife to David Meschke, of Auburn; son, Angel Montero, of Fort Worth Texas; his domestic partner and love of his life for the past 28 years, Margaret Alvarado, of whom he lived with; brother, Manuel Montero, of Florida; grandson, Eric Meschke husband to Ashley Meschke, of Dudley; grand-daughter, Ashley Johnson wife to Jeremiah Johnson, of West Boylston; brother, Manuel Montero, of Florida; 4 girls that he loved like his own Carol, Alvarado, and Rose Germain of Worcester; Cindy Little of Leicester; Anita Alvarado of Oxford; He also nieces, nephews, and cousins; grandchildren and great-children that he loved like his own; his best little buddy, James Fenner, of Worcester along with many other wonderful friends that he made through the years.

Family and friends are invited to celebrate Raul’s life with calling hours at Callahan, Fay and Caswell Life Celebration Funeral Home, 61 Myrtle St., Worcester on Thursday, February 17th from 5 until 7pm. A funeral Mass will be celebrated on Friday, February 18th at 10am in Our Lady of the Angels Parish, 1222 Main St., Worcester. Burial will immediately follow in Worcester County Memorial Park, 217 Richards Ave., Paxton.