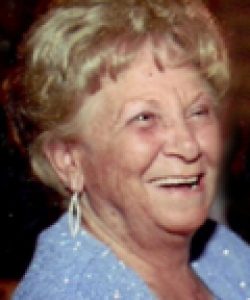 Place of Service Our Lady Of Mount Carmel Church

Section Garden of Valor I Lot Number: 285Grave Number: B#3

Lena D. (Boffoli) Villa, 86, of Worcester passed away Monday, December 13, 2010 with her family by her side. Lena was born August 25, 1924, a daughter of Anthony and Concetta (Angolano) Boffoli. She grew up on Shrewsbury Street and has lived in Worcester all her life.

Lena worked as Office Manager for her husband at Charles Villa Injection Molding before retiring. Previously she worked as an assembler for G.E. Telecron.

Lena was a member and Eucharistic Minister of Our Lady of Mt. Carmel Church. A member of the church Golden Years and the Worcester Lodge #168 Order Sons of Italy. Lena loved to dance and travel. She and her husband Buddy were members of the weekly Saturday night group at the Froshinn Club for dinner and dancing. Lena also traveled to many places and took many cruises with her husband and friends. She was a family oriented mother who cherished the times she could spend with her husband, children and grandchildren. The holiday season was Lena’s happiest part of the year. She loved to bake and make cookies for the holidays, weddings and special occasions. She will be greatly missed.

The funeral will be held Thursday, December 16th from the MERCADANTE FUNERAL HOME & CHAPEL, 370 Plantation St. with a Mass at 12:30 pm in Our Lady of Mt. Carmel Church, 24 Mulberry St. Burial will follow in Worcester County Memorial Park in Paxton. Friends and relatives are invited to visit with the family Wednesday, December 15th from 5 pm to 8 pm in the funeral home. In lieu of flowers memorial contributions may be made to the Alzheimer’s Association of Massachusetts, 311 Arsenal Street, Watertown, MA 02472 or to the Pulmonary Fibrosis Foundation, 811 W. Evergreen Avenue, Suite 303, Chicago, IL 60642.