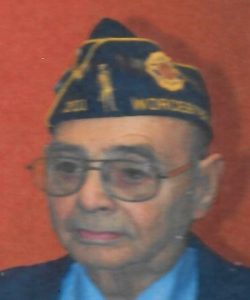 Section Garden of Valor I Lot Number: 285Grave Number: B#2

Charles “Buddy” Villa, 95 of Worcester, a decorated WWII U.S. Navy Veteran passed away with loved ones gathered at his side, Thursday, October 31, 2019 after a brief illness.

Buddy was born in Worcester, on March 29, 1924, the only child of James and Theresa (Santo) Villa.  Raised in Worcester, Buddy graduated from Commerce High School. He then enlisted in the U.S. Navy during World War II, serving proudly as a sonar operator in the Pacific, African and European theatres earning three battle stars.  Buddy notably, took part in the Normandy D-Day Invasion as part of the Naval forces diverting attention away from the actual invasion forces.   Upon discharge and in 1948, he married in Our Lady of Mt Carmel Church, the “Love of his life” Lena Boffoli and began a 62-year marriage of devotion, dedication and family until December 13, 2010 when Lena left his side.  Several years later, Buddy found companionship with another widowed women Virginia Frankian.  He has lived in Worcester all his life.

Buddy founded, owned and operated the Charles Villa Injection Molding Corporation for over 40 years before retiring.  He then spent time with his son Jim at JEVCO Company helping where he could.

Buddy was a member and weekly church attendee of Our Lady of Mt Carmel, Our Lady of Loreto Parish.  A member, former board of director and volunteer of the Eastside Post 201, American Legion, volunteering on various committees including the former breakfast club, the annual Memorial Day cemetery group placing flags in St John Cemetery on deceased veterans’ graves, the parades, June day cookout, etc.   Buddy loved to dance and could be found with Lena dancing whenever they could including the Saturday night group at the Frohsinn Club and any function they attended.  He was also a third-degree member of the Pope John Council Knights of Columbus.   Buddy appeared many times as a Charlie Chaplin Impersonator placing smiles on the faces of many people.  During this past Boston Red Sox season, Buddy was honored on the Fenway Park field at a game in a ceremony Hats off to Heroes for his World War II service.

Friends and relatives are invited to attend calling hours Wednesday, November 6th from 4:00 pm to 7:00 pm in the MERCADANTE FUNERAL HOME & CHAPEL, 370 Plantation St.  Members of the Eastside Post 201 American Legion will gather at 5:30 pm at the funeral home to conduct their ritual.  His funeral will be held Thursday, November 7th from the funeral home with a procession to Our Lady of Loreto Church, 37 Massasoit Rd where his celebration of Christian burial mass will be at held 11:00 am.  Burial with Naval Military honors will follow in Worcester County Memorial Park in Paxton.  Flowers may be sent, or memorial contributions made to the Eastside Post 201, American Legion, 326 Plantation St.  01604.

The Villa family would like to thank the Doctors, nurses and staff of the ICU Neurology, Lakeside 2 UMass hospital, for their guidance and kindness in a thoughtful way to help us to make Buddy comfortable in his passing moments.