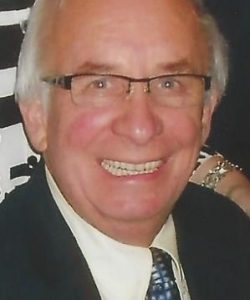 He leaves his wife of 48 years, Carol A. (Huban) Lysiak; a daughter, Kathleen A. Donahue of Worcester; a son Joseph F. Lysiak Jr. and his wife Julie of Paxton; four grandchildren, Benjamin and Abbey Donahue of Worcester, and Ella and Michael Lysiak of Paxton; a brother, Frank Lysiak and his wife Kitty of Buffalo, N.Y.; three sisters, Mary Ann Lysiak of East Boston, Bernadette LaCoursiere and her husband Joseph of Worcester and Carol Gaudette and her husband Ted of Holden; and many nieces and nephews. His brother Paul predeceased him.

Joseph was born in Worcester, son of Frank and Stasia (Borowy) Lysiak, and lived in Worcester all his life. He attended St. Mary’s High School and the Ward Business School, both in Worcester.

He was a U.S. Air Force veteran of the Vietnam War. In addition to a tour of duty to Vietnam, he served with the Air Force in Hamburg, West Germany and Turkey.

Joseph was a steelworker for many years at Johnson Steel & Wire Co. in Worcester. He was a member, steward and former president of Union Local 3189 of the United Steelworkers of America. After the company closed, he became a claims adjuster with the Massachusetts Division of Unemployment, from which he retired.

Joseph was a longtime parishioner of Christ the King Church, where he volunteered to help the parish in countless ways. He was also a member of the Alhambra Council #88 of the Knights of Columbus. He enjoyed fishing, nature, and attending his grandchildren’s activities.

Joe was an incredibly kind and generous person. His Catholic faith and his family were foremost in his life. He loved and was devoted to his wife, children and grandchildren, who will greatly miss him.