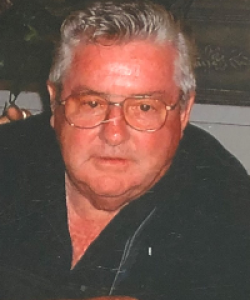 Section Garden of Heritage I Lot Number: 347Grave Number: A#1

John “Jack” Henry, 81, died Sunday, January 19th. His wife of 36 years, Carol A. (Polissack) Henry died in 2005. He leaves his children, Tracy St.Jean of Oxford, Sean Henry of Jackson, Wyoming and Christopher Henry and his spouse, Darwin Cabello of Worcester; two brothers, Paul Henry and Michael Henry both of Worcester; a sister, Maureen Henry of Worcester; a granddaughter, Morgan St.Jean and many nieces and nephews. He was predeceased by his brothers, William, Thomas, Francis and Martin; his half-brother, Robert Phelan; a sister, Cathleen and longtime friends, Mary and Robert Babbidge.
He was born in Worcester the son of Martin and Catherine (Murphy) Henry. In 2002, Jack retired from the City of Worcester where he worked as a groundskeeper at Foley Stadium and a custodian with the school department for 18 years. He previously as a baker with Table Talk Pie for 25 years.
Jack was a member of the Bakery and Confectionery Union. He appreciated vacations with family and friends, cookouts on the deck, badminton in the driveway and Sunday dinners with a game of poker afterwards. Jack enjoyed visiting Nantasket Beach and traveling with his wife especially to Hawaii, Aruba, Las Vegas and the Dominican Republic. Jack was a longtime supporter of the American Red Cross and the St. Jude Children’s Research Hospital.
His funeral is Saturday, February 8th with a service at 10:00 AM in O’Connor Brothers Funeral Home, 592 Park Avenue. Burial will follow in Worcester County Memorial Park, Paxton. Calling hours are Friday, February 7th from 5:00 until 7:00 PM in the funeral home. Please omit flowers, memorial contributions may be made in Jack’s name to the St. Jude Children’s Research Hospital, 501 St. Jude Place, Memphis, TN 38105.