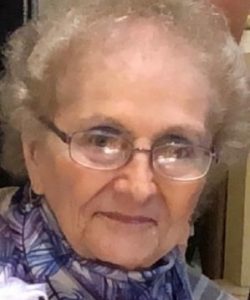 Frances J. (O’Connor) Moen, 90, was called home to God on May 19, 2021. She is now with her husband, Jim, her son, Jimmy, and her daughter, Kathy, who predeceased her. Fran was an amazing, caring person who will be dearly missed by all who knew her, especially her family and close friends.

She was born in Concord, New Hampshire, daughter of the late Dennis F. O’Connor and Dagmar O’Connor (Halberg). She also had a brother, the late Richard O’Connor.

Fran’s most important job was being a full-time mom for her family. She also worked at Morgan Linen Service and as an aide in the newborn nursery at St. Vincent Hospital, both in Worcester. Fran and Jim relocated from Worcester to Fort Lauderdale over 30 years ago. Both of them worked at the retirement community they lived in, Carefree Cove Park.

Fran’s biggest joy was spending time with her family. She also enjoyed going out dancing with her husband and bowling. She became a huge fan of the Red Sox and the Celtics in her later years.

A Mass to celebrate her life will be said at Sacred Heart-St. Catherine of Sweden Church, 100 Cambridge Street, Worcester, at noon on Friday, May 28th. All are welcome to attend. Visiting hours and burial services will be private for the family.