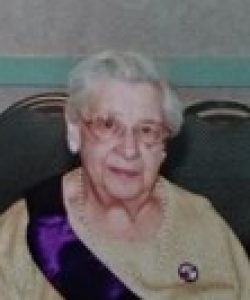 Section Garden of Valor I Lot Number: 47Grave Number: A#4

Dorothy M. (Nault) LaPorte, 100, of Auburn passed away peacefully on Tuesday September 3, 2019 surrounded by her loving family. She was the wife of the late Alphonse F. LaPorte, with whom she shared 66 years of marriage.

Born and raised in Worcester, Dorothy was the daughter of the late Henry L. and Mary C. (Powers) Nault. She was educated in Worcester and graduated from Commerce High School in 1938, after which she met and married the love of her life, Alphonse. The two settled in Auburn and began to raise their family.

Always involved in the community, Dorothy was a member of the Worcester/Auburn Emblem Club, Chester P. Tuttle Post #279 American Legion Women’s Auxiliary, and was a lifelong member of North American Martyr’s Church in Auburn. In her free time, she could often be seen working on her crafts – she loved ceramics, in particular, as well as knitting afghans for her grandchildren. She was a dedicated wife and mother to her family, always ensuring that they were well cared for.

A special thank you to Life Care Center of Auburn (Primrose) for the love and care they gave Dorothy.

Relatives and friends are invited to visit with Dorothy’s family on Friday September 6, 2019 between the hours of 4:00 – 7:00 PM at the BRITTON-WALLACE FUNERAL HOME, 91 Central Street, Auburn, MA 01501. A funeral Mass will be celebrated at 10:00 AM on Saturday September 7, 2019 at North American Martyr’s Church, 8 Wyoma Drive, Auburn, MA 01501, and those attending the Mass are respectfully requested to meet directly at the church. Burial will follow at Worcester County Memorial Park, 217 Richards Avenue, Paxton, MA 01612. In lieu of flowers, donations may be made to New England Hospice, 190 Old Derby St., Suite 304, Hingham, MA 02043.