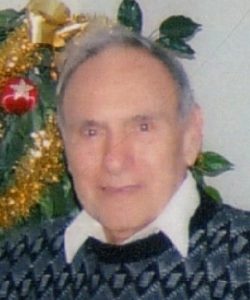 Charles A. “Charlie” Gelardi, 98, passed away on January 3, 2021 after a short illness at Brookside Rehabilitation & Healthcare Center, Webster. Charlie was born in Worcester, son of Frank and Josephine (San Clementi) Gelardi and lived in Worcester his whole life. He graduated from Worcester Boys Trade School in 1940 and quickly attained his plumber license. At that time, he was the youngest Master Plumber in Massachusetts. During WWII, Charlie served in the Army Special Corps as Technical Sargent/High Speed Radio Operator in the South Pacific, where he was one of the fastest Morse code operators.

After the war, Charlie started up a successful plumbing company called “Gelardi Plumbing & Heating” which provided plumbing repair services and bathroom remodels for 3 decades. Charlie also owned several rental properties in Worcester, including his own home across from Elm Park which included 13 boarding rooms. In his later years, he started up another company called “Gelardi Builders” and built many single family and duplexes on land he owned off Wildwood Ave in Worcester. He had to build 4 new streets for this development: Laurel Brook St, Monticello Drive, Oak Leaf Terrace, and Shady Brook Lane, which is his pride and legacy towards Worcester’s growth and history.

Charlie was talented man & enjoyed being with people. Golfing was his passion, his best moment being when he got a hole-in-one at Heritage CC. He competed in Four Ball tournaments at Wachusett CC & joined many group golf trips to Myrtle Beach. He was member of the Greendale Men’s Club & participated in trips with that group. He enjoyed bowling leagues in the winters where he once had an opportunity to bowl with Stacia Czernicki. Charlie often played piano and guitar for his amusement in his home. In his teenage years, he was a member of a Country Western band that toured Worcester County. During his senior years, he learned how to oil paint and created many beautiful landscapes & portraits. He also liked to dabble with hobbies like Ham radio, CB radio, and photography. Friends and family will tell you he always had a joke to share.

His funeral is Friday, January 8th with a Mass at 11:00 a.m. in Blessed Sacrament Church, 551 Pleasant Street, Worcester. Burial will follow in Worcester County Memorial Park, Paxton. A visitation will be held in Blessed Sacrament Church from 9:45 a.m. until the start of the service. In lieu of flowers, memorial contributions may be made to St. Jude Children’s Research Hospital, 501 St. Jude Place, Memphis, TN 38105 or to the MSPCA Animal Care and Adoption Center, 350 South Huntington Avenue, Jamaica Plain, MA 02130. O’CONNOR BROTHERS FUNERAL HOME, 592 Park Avenue is assisting the family with arrangements.