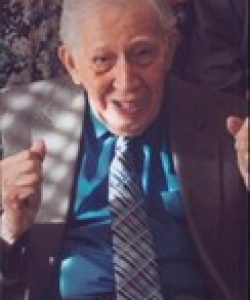 Section Garden of Valor I Lot Number: 33Grave Number: B#3

Waverly L. Taylor, Jr., (Joe) 95, of Worcester, a pillar of his church, Belmont A.M.E. Zion Church, passed away on Sunday, October 27, 2019 at Knollwood Nursing and Rehabilitation. He was predeceased by his wife, Barbara (Schuyler) Taylor in February 2018; his first wife, Anna (Teixeira) Taylor, predeceased him in 1985.

Waverly is survived by twin daughters, Laurie Riley and her husband Carlton, and Lee A. Clark, all of Worcester; five grandchildren, Anna, Talia, Jordan, Shanae, and Angelica; three great grandchildren, Amora, Taylor, and Amarie; a sister, Alice Douglas of Worcester; many nieces and nephews; relatives and church family. He was predeceased by his brother, Leslie Taylor. Waverly was born in Worcester, son of the late, Waverly L. and Charlotte (Lithicum) Taylor. He grew up in West Boylston and moved to Worcester in the late 1940’s. He served his nation proudly in the United States Army Medical Corps, in the Philippine-Asia-Pacific Theatre, during World War II.

Waverly worked for many years at Norton Company, retiring as shift supervisor. He had previously worked for the former Harrington-Richardson Firearms company in Worcester. He was a long-time faithful member of Belmont A.M.E. Zion Church, where he was an Usher, served as a Trustee, was a member of the Lay Council, and was a Preacher’s Steward as well as a Church Sexton and drove the Church Van as needed. Waverly received multiple recognition awards during his lifelong membership in the A.M.E. Zion Church.

Waverly was awarded a Key to The City of Worcester in August 2017, at a ceremony commemorating the rededication of the “Colored Citizens of Worcester Honor Roll” monument in Lincoln Square. He is the last surviving soldier of the 145 listed on the Honor Roll.

He was deeply loved by his family and will be remembered as a great man. His church and his community will remember him as an exemplification of living the principles of Jesus Christ.