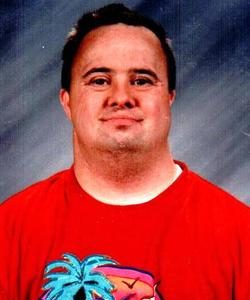 Walter J. “Wally” Raad, 60, passed away peacefully with his mother by his side on Friday, July 20, 2018 at UMass Memorial Medical Center, University Campus.

He was born in Worcester and attended the Mercy Centre for 38 years where he took pride in a variety of jobs that were offered to him in the workshop.

Wally had a passion for the opera and could often be heard singing along with his mom. He had a tremendous faith in God and loved to pray. He was also interested in politics and very proud to be a registered voter. He enjoyed participating in the Special Olympics where he won many gold medals in swimming. Wally enjoyed other sports such as field and track and he was very excited when his basketball team beat Holy Cross College.

He will be lovingly missed and remembered by his mother and best friend, Louise J. Witz of Holden; a brother, David Raad and his wife, Pamela of Thompson, CT; a sister, Jacqueline Parker and her husband, Richard of Foxborough; his aunt, Carol Gorski of Paxton; his cousin, Lucille Worley and her husband, Harry of Worcester; and several nieces and nephews. Walter was predeceased by his step-dad, Robert M. Witz; his sister, Deborah Miller; and his aunt and uncle, Helen and Mitch Baroud.

The family would like to extend their sincere appreciation to the nurses and staff at UMass Medical Center Lake Ave, 7th floor ICU for the kind and compassionate care they provided to Wally and his mom during his illness.

Relatives and friends are invited to visit with Wally’s family from 9:30 to 10:30 a.m. on Wednesday, July 25, at Miles Funeral Home, 1158 Main Street, Holden followed by a Mass of Christian Burial at 11 a.m. at St. Mary’s Church, 114 Princeton Street, Jefferson. Burial will follow at Worcester County Memorial Park in Paxton.