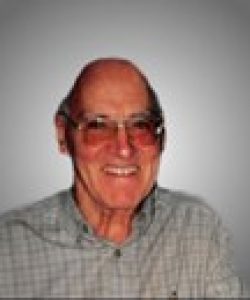 Vincent Ross, 93, died peacefully at home on the morning of Tuesday, November 12, 2019. He was born in Belchertown, the son of Mary E. (Morey) and Alexander S.A. Ross.

Growing up, Vincent learned the value of hard work and an appreciation for the outdoors while working on his family’s farm in Belchertown. He graduated from Belchertown High School and soon after answered the call to service by enlisting in the U.S. Navy. After his service during WWII, Vincent returned home and studied at the Benjamin Franklin Institute of Technology in Boston. It was during this time that he met the love of his life, Virginia L. Doucette. The couple married and lived in Springfield before moving to Shrewsbury where they lived for over 30 years. They then moved to Rutland where they remained for the last 42 years. Vincent worked for the Simplex Time Recorder Corporation for 32 years, retiring in 1991. He was a member of St. Patrick’s Church in Rutland. Vincent’s greatest joy came from working on his farm, chopping wood and spending time with his family. He was a very sincere, caring and loving father and friend.

He will be lovingly remembered by his wife of 69 years, Virginia L. (Doucette) Ross; his sons, Vincent S. Ross and his partner, Terry May of Ridgeway, SC and Christopher Ross and his wife, Lee of Rutland; his daughters, Ellen Ross of Leicester, Kathleen Healy of Holden and Jeanette Hoch and her husband, Robert of Rutland; a sister, Bella Robidoux and her husband, Jack of Chicopee; nine grandsons; two great granddaughters; and several nieces and nephews. Vincent was predeceased by his daughter, Theresa Bell in 2018; his brothers, Allen, Stanley, Malcolm, William, George and Francis Ross; and his sister, Celia Smith.