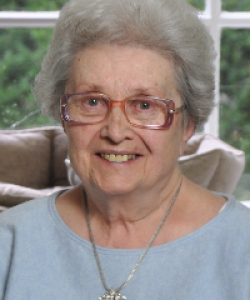 Place of Service Our Lady of Czestochowa

The embodiment of sunshine and kindness, Therese Kaczyk was a friend to all who crossed her path. Her heart and home were always open to family, friends, and strangers alike. Her legacy is love.

Terry passed away Wednesday, October 6, in her home in Centerville, MA at 92 years old. She was born the second of five children in 1929 in Worcester, MA to Polish immigrants, Mary (Kawecka) and Andrew Makowiecki. She spent most of her life in Worcester and graduated from St. Mary’s High School and Salters Secretarial School. During World War II, Terry worked at Fitzwell Girdle Co. and Brown Shoe Co., where she made life preservers and boots for U.S. troops, and also served as a Red Cross Volunteer at St. Vincent’s Hospital. She later worked at Rockwood Sprinkler Co. as a secretary in the Engineering Department.

In 1946, Terry and her friends walked into Easton’s Drugstore, where she caught the eye of a young soda jerk, Joseph Kaczyk. She overheard him say, “I’ll take the little one,” and so he did. They married in 1950, had five children, and spent the rest of their lives together until his death in 2020. In her own words, the greatest joys in her life were the roles of wife, mother, and grandmother. She was the kind of mother that would let her kids stay home from school to teach them how to make sock dolls and the kind of grandmother that would let her grandkids eat dessert before dinner.

As her children grew up, she became a teacher, first at Elm Park Community School and then at Venerini Academy. Terry was patient, gentle, fun, and free of judgement, and her students adored her.

Terry had a natural, child-like wonder about the world around her and never stopped asking questions and learning new things. She was a gifted, prolific artist and had a remarkably creative mind. She especially loved drawing birds, flowers, and animals in her sketchbooks, often adding short stories and poems to accompany the imagery. Terry also delighted and entertained her family with playful, nonsense songs she would invent. She was an avid reader and loved playing Chinese checkers.

Her Catholic faith and devotion to prayer were an integral part of her life. She served as a Eucharistic Minister, taught CCD at Our Lady of Fatima Church, became an Associate of the Venerini Sisters, and had many dear friends in the faith. Terry was also proud of her Polish heritage and kept the language, traditions, and culture alive throughout her life. In retirement, Terry and Joe hosted a weekly polka radio show on WCUW and she was dubbed by her fans as the DJ with the “million dollar voice.”

Terry was drawn to people, and they were drawn to her. She was uninhibited and always ready to strike up a conversation with a stranger. People of all ages from the neighborhood, church, school, and Boy Scouts gravitated to the Kaczyk house to hang out. Her genuine curiosity and warmth made everyone feel welcome and special. After a visit with her, she would always tell you in Polish to “go with God” as you walked out the door. So now we say to you, Terry, in your famous words, “Idz z Panem Bogiem.”

There will be calling hours at Henry-Dirsa Funeral Home, 33 Ward St, Worcester, on Tuesday, October 12, 9:30-11:30 am, followed by Mass of Christian Burial in Our Lady of Czestochowa Church, 34 Ward St., Worcester. Burial will be in Worcester County Memorial Park, Paxton.