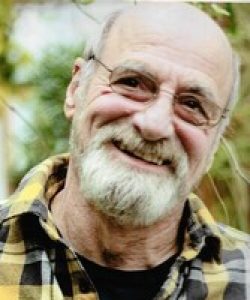 Robert Laraia, 75, of Worcester passed away May 8, 2020 after a brief period of declining health.

Robert was born in Worcester, one of six children of Artemio and Rose (Arello) Laraia, raised on St Anne’s Hill in the Italian section of Worcester, Robert graduated from Commerce High School. Robert furthered his education at Quinsigamond Community College, earning his bachelor’s degree in Education from the University of Massachusetts Amherst.   Robert served his country proudly in the U.S. Air Force in Vietnam.  Upon discharge, Robert began his career in horticultural work, by founding Pippins Garden Spot, a greenhouse in the family’s backyard that still remains today.

Robert eventually accepted a position as an Exterior Landscape designer for Greenscape landscaping before retiring in 2014.  Robert notably, helped design and care for the interior of St Vincent’s Hospital Atrium.   For his specialty and knowledge Robert earned the name “The Plant Man”, which his designs and greenhouse truly exhibited.

Bob was predeceased by his parents, and two brothers Joseph and Richard.    He is survived by two brothers, Arthur “Red” Laraia and Gerald “Butch” Laraia; his only sister, Teresa Laraia; his adoring niece Gina Abbott and her children, Brittany, Giana, Chase and Jake. Along with Aunts, cousins and close friends.

Bob was an excellent cook and baker.  His specialty being, his famous cream puffs and his pies, the hit of every gathering.  Bob loved hosting his annual 4th of July family and friend’s cookout, all enjoying the food, fun and fireworks. He loved rooting for the Red Sox with his African Grey parrot Phil.

Words alone cannot express how much he will be missed, leaving a void in many of our lives as he was remarkably kind, caring, funny and he touched the lives of everyone he met.  His heart was pure and his love unconditional.

Funeral services for Robert will be held Wednesday,  May 13th at 11:30 am in the MERCADANTE FUNERAL HOME & CHAPEL, 370 Plantation Street, Worcester.  Due to the limit on participants in the building, his service can be watched online by visiting www.mercadantefuneral.com and clicking live services.  Burial will follow at Worcester County Memorial Park in Paxton.