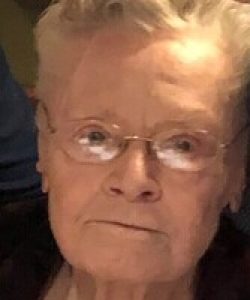 Rita is survived by her loving family including two daughters, Sandra M. Berquist and her husband Ronald of Sterling, and Cynthia P. DeCristofaro of Braintree; four sons, Jack A. Mazeika and his wife Peg of Oxford, WI, James J. Mazeika and his wife Teresa of Worcester, Michael C. Mazeika and his wife Leanne, and Christopher P. Mazeika and his wife Camden all of Sturbridge; fourteen grandchildren, Brian, Kristen, Matthew, Nicholas, Ian, Dylan, Maxine, Adrienne, Jack, Thomas, Elise, Kaspar, Adam, and Eben; five great granddaughters; many nieces and nephews. Rita was predeceased by her son in law, Robert DeCristofaro in October 2011. Rita was born in Worcester and was the second to last surviving of seven children born to the late, Julius and Christine (Luksis) Walent. She lived for many years in Worcester before settling in Shrewsbury.

Rita had been a member of Saint Mary’s Church in Shrewsbury. She enjoyed sewing, making great food, and the unconditional love of her grandchildren. Rita always loved the beach and was very proud of her Lithuanian heritage.

Funeral Services for Rita will be held privately.

In lieu of flowers, donations in her memory may be made to Notre Dame du Lac, 555 Plantation Street, Worcester, MA 01605.