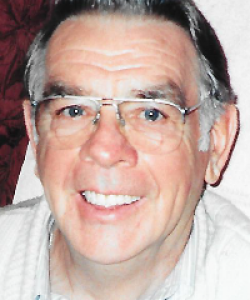 Richard T. Hakenson, Sr. (age 87), passed away peacefully at home on November 1, 2022, surrounded by his family. He leaves his wife Carol A. (Frost) Hakenson. They were married for 67 years. He leaves his brother Roy W. Hakenson and his wife Terry of Brookfield, MA. His sister Rita (Hakenson) Lisi, predeceased him in 2015.

Richard was born in Worcester, the son of Roy B. and Madeline P. (Braley) Hakenson. He graduated from Commerce HS 1953, was a Korean War Veteran serving from 1954 through 1957. Retired from Norton Company 1992. He was a devoted husband, father and grandfather and great-grandfather. He loved long drives through New Hampshire and getaways to Pittsburg, NH with his wife and best friend Carol. He will be fondly remembered for his great sense of humor and inclusiveness of all people.

Calling hours will be held on Monday, November 7, 2022 from 6-8 P.M. at Nordgren Memorial Chapel, 300 Lincoln St, Worcester, MA. A Funeral Mass will be held on Tuesday, November 8, 2022 at 11:00 a.m. in Saint Bernard Catholic Church on 228 Lincoln Street, Worcester. Burial will follow at Worcester County Memorial Park, Paxton. In lieu of flowers, donations are encouraged to be sent to:
The Jewish Healthcare Center, Salisbury Street, Worcester 01609