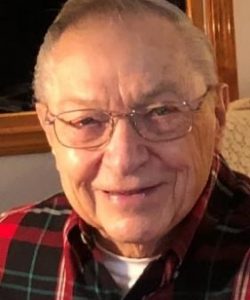 He was born in Spencer, the son of Leo A. and Evelyn F. (Thibault) Cloutier.

He leaves his wife of 64 years, Madeleine M. (Beaudreau) Cloutier, and three children; Cynthia A. Peterson and her husband Steven of Newbury, NH, Vincent P. Cloutier and his wife Brenda of Spencer and Richard P. Cloutier of Fall River. He leaves a brother, Leo Cloutier and his wife Peggy of Columbia, MO, and a sister, Lorraine Calvetti and her husband Richard of Milford, NH. He also leaves 13 grandchildren: Jeffrey, Amanda, Jason, Brian, Nicolas, Nicole, Eric, Jared, Brianna, Ashley, Janna, Lauren, and Michael, and 14 great grandchildren: Haley, Logan, Alivia, Payton, Kinley, Zachary, Calen, Benjamin, Brayson, Damien, Ariana, Jack, Matthew, and Patrick, and several nieces and nephews. He is predeceased by his son- in- law Kenneth Persinko in 2017.

Dick graduated from David Prouty High School and then entered the US Army in May 1955. He was stationed at the Psychological Warfare Center at Fort Bragg, NC during the Vietnam War. He was employed for 39 years at National Grange Ins. Co. as a claims manager until his retirement in 2005. He enjoyed watching the Red Sox and Patriots and was a member of the Knights of Columbus Council #118 in Spencer. He was the Choir Director at St. Mary’s parish for many years and enjoyed spending time with his wife traveling to the casino. He was a devoted husband, father, grandfather “Pepere” and “Pa Dick” to his grandchildren, and just a wonderful friend to all. We will miss him dearly!

His funeral will be held on Wednesday, July 7 from the J.HENRI MORIN & SON FUNERAL HOME, 23 Maple Terr., Spencer with a Mass at 10 a.m. in Our Lady of the Rosary Church, 7 Church St., Spencer. Burial will follow with Military Honors in Worcester County Memorial Park, Paxton. Calling hours are Tuesday, July 6 from 4 to 7p.m. In lieu of flowers, contributions may be made to Mary, Queen of the Rosary Parish, 46 Maple St., Spencer, Ma 01562 or Spencer Rescue Squad, 6 Bixby Rd., Spencer, MA 01562.