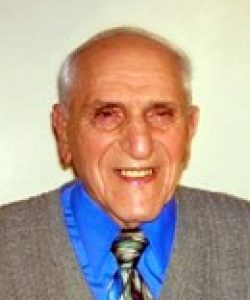 Retired Worcester Police officer, Ralph J. Lazzaro, 101, a lifelong Worcester resident passed away peacefully Wednesday, February 5, 2020 with the family he cherished gathered at his side.

Ralph was born in Worcester, on November 15, 1918, one of five children of Italian immigrants, Giovanni and Margaret (Pasquarella) Lazzaro.   Raised on Seward Street off Shrewsbury Street in the Italian neighborhood of Worcester, Ralph graduated from Commerce High School class of 1938.  Shortly after the Japanese attack on Pearl harbor in 1941, Ralph joined the U.S. Army serving his country proudly overseas in Normandy, Northern France, the Rhineland, Ardennes and Central Europe.   He notably, took part in five major battles including the D-Day Invasion, Battle of the Bulge, and liberation of Auschwitz as a member of the 704th Tank Bn, 4th Armored Division attached to General George Patton.  He earned four battle stars, four President Unit citations, the order of the French awards and the bronze star.    Upon his return to Worcester, Ralph married his sweetheart Anne Borg, began his family and his career.    Ralph first worked for the former Pullman Standard railroad car company, then the Norton Company, before being appointed a Police Officer in 1953 for the City of Worcester.  He so loved his new role serving the citizens of Worcester he remained an officer for 30 years before reaching mandatory retirement age in 1983.  Ralph notably remained independent residing in his own home for his entire life, in his later years made possible by the support of family, Elder Services of Worcester, Meals on Wheels, and kindly neighbors.

Ralph’s wife Anne passed away on October 18, 1985.  He is survived by his devoted son and daughter in law, John and Cheryl Lazzaro of Millbury; two cherished grandsons, Christopher and Nicholas Lazzaro; two brothers, Anthony and Armand Lazzaro; Many nieces, nephews, extended family and friends.   Besides his parents and beloved Anne, two sisters, Rose Lazzaro and Phyllis Vigliotti predeceased him.

Ralph was an active and devoted father, encouraging his son John’s academic and athletic development over many years, as well as instilling practical knowledge and personal character.  Whenever possible, Ralph would attend John’s Little League and Babe Ruth baseball contests to cheer him on.  He was particularly proud when John pitched a no -hit shut- out near perfect game back in 1973, and made certain that this fete was published in the Worcester T&G.

During the years of his retirement, Ralph enjoyed life to its fullest.  After the passing of his wife Anne, he took up the hobby of ballroom dancing, which is where he met his long-time loving companion and dear friend Anna Oby.  Together, they routinely went dancing, played endless games of cribbage and cards, and traveled extensively, “snow birding” in Florida for several winters.  Anna predeceased him in November,2014.  Ralph considered Anna’s son Kenneth and his wife Ruth as part of his family, and greatly appreciated their ongoing communications and acts of kindness towards him.

In addition to dancing, Ralph was an avid and accomplished league candle pin bowler, and enjoyed a competitive game of cards, no matter what the game.  He also vigorously campaigned on behalf of his son John’s two Worcester City Council races, 1993 and 1997.  Ralph took up the game of Bocce during the 1990’s and enjoyed league play at East Park.

Ralph became a grandfather in 1997, and again in 2000.  He reveled in his role as “grandpa”, frequently babysitting, along with Anna.  He enjoyed visiting every Sunday afternoon for dinner prepared by his devoted daughter-in-law Cheryl, spending copious amounts of play time and conversations with Chris and Nick.  He was particularly proud of their various accomplishments over the years, always attending graduations and other recognition events, such as their respective Eagle Scout ceremonies.  They were a source of pride and joy for Ralph, lovingly supporting him with various errands and chores in his later years of life.

Up until the time of his passing, Ralph was an avid reader, plowing through a variety of books often provided to him by his devoted grandson Christopher, as well as dear friends Kenneth and Ruth.  He enjoyed books of history, and fictional tales of the wild west, crime, espionage, and military conflicts.  Ralph read the Worcester Telegram cover-to-cover every day and enjoyed keeping up with the latest local, national, and international news.

Ralph was an avid New England sports fan, frequently wearing a Patriots cap.  He would watch every Red Sox game on TV, but, in his heart of hearts, was a die -hard New York Yankees fan.  He idolized “Joltin Joe” Dimaggio, the “Yankee Clipper”, as the greatest ever, and was thrilled with meeting him briefly in 1983 at his son John’s College of the Holy Cross graduation ceremony, as Joe D. received an honorary degree.

Ralph was a life member of Our Lady of Mt Carmel Church. The international brotherhood of Police officer’s union local 9-11, the Worcester Police Relief Association, the Eastside Post 201, American Legion, and the Greendale Retired Men’s Club.    He cherished his role as a police officer, husband, father and grandfather.  He was a very respected and loved police officer by his co officers and the public.

A period of calling hours will be held Monday, February 10th from 9:30 am to 11:00 am in the MERCADANTE FUNERAL HOME & CHAPEL, 370 Plantation St.  followed by a prayer service at 11 am.  Burial with military honors will follow in Worcester County Memorial Park in Paxton.  In lieu of flowers memorial remembrances can be made to Troop 110 Millbury, Boy Scouts of America,  9 Jaclyn Rae, Millbury, MA 01527.