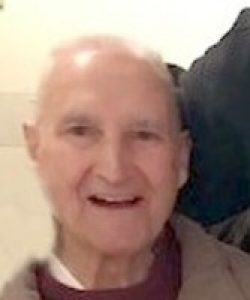 Peter M. Antonucci, age 90 and a lifelong resident of Worcester, passed away surrounded by loved ones at his home on Thursday, Thanksgiving Day, November 25, 2021.

Peter was born in Worcester, one of four children of Giulio and Sterina (Bisci) Antonucci. Educated and raised in Worcester, Peter joined the U.S. Navy during the Korean War, serving his country proudly aboard the U.S.S. Baltimore. Upon his discharge and return home, Peter married the “love of his life” Mary M. Langanelli.  This past October, the couple celebrated their 65th anniversary. Peter founded and served as proprietor of Pete’s Atlantic service station on Grafton Street for 10 years before accepting a position with the City of Worcester, Department of Public Works as a motor equipment mechanic.

Peter was a member of Our Lady of Loreto Church and the Worcester Lodge Sons of Italy. Peter cherished the times he could be with his family, especially his grandchildren. He daily made sure his youngest grandson Michael got to and from elementary school safely. He was a Mr. Fixit, who enjoyed tinkering around the house, repairing anything that needed fixing in his, relatives, and friends’ homes. He also enjoyed antique cars, repairing motors, Senior bus trips, travels to Florida and Disney, cruises  to Alaska and the Caribbean.

A period of visitation will be held Wednesday, December 1st from 9:00 am to 10:30 am in the MERCADANTE FUNERAL HOME & CHAPEL, 370 Plantation St. followed by a procession to Our Lady of Loreto Church, 37 Massasoit Rd where his funeral mass will be celebrated at 11:00 am. Burial with military honors will follow in Worcester County Memorial Park in Paxton.