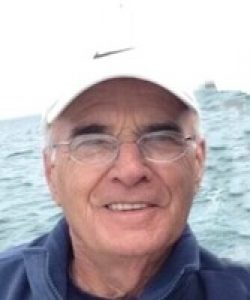 Peter L. Regonini, 81, of Brewster, formerly of Worcester, passed away Sunday, May 8th, 2022, after a battle with cancer.  His family was by his side.

Peter was born in Worcester, grew up in Clinton with his parents, Louis, and Gemma (Porciello) Regonini  and his seven siblings. He graduated from Clinton High School and immediately after graduation joined the U.S. Navy, proudly serving aboard the U.S.S. Aircraft Carrier John F. Kennedy. Peter then worked 34 years for Norton Company before retiring.

In 1965, Peter married the “love of his life” Joyce D. Sutherland. The two bought a home in West Tatnuck and raised their family there. Peter loved boating and fishing on Cape Cod. He was an avid Red Sox, Patriots, Celtics, and Bruin’s fan; He enjoyed both watching and attending games.   He loved to travel with Joyce, especially to Aruba and Ft Lauderdale in the Winter. Peter’s world was centered around his family. His daughters, and grandchildren were his greatest pride and joy. He always made time for his girls and then in later years attended all his grandchildren’s activities and sporting events.

Peter is survived by his wife Joyce; his two daughters, Lisa Massad and her husband David of Shrewsbury,  Marcia Boulanger and her husband Nate of Paxton;  three sisters, Lucia Johnston and Jean Lamlein of Clinton and Joan Regonini of Shrewsbury;  two brothers, James and Jack Regonini both of Clinton; six grandchildren who proudly called him “Grampy” Ryan, Jonathan and his wife Julie, Rachel, Evan, Gemma and Mia;  two great grandchildren, Maddie and Jonnie; Many nieces, nephews, extended family and friends.  A sister, Marilyn Morgan and brother, Louis Regonini, both predeceased him.

A mass celebrating Peter’s Life will be held Friday, May 13th at 10:00 am in St John’s Church, 40 Temple St. Burial with U.S. Navy honors will follow in Worcester County Memorial Park in Paxton. There are no calling hours. Memorial remembrances in Peter’s name can be made to  St Jude Children’s Research Hospital, 501 St Jude Way, Memphis, Tenn. www.stjude.org/donate. The MERCADANTE FUNERAL HOME & CHAPEL, 370 Plantation St is honored to assist the family with arrangements.