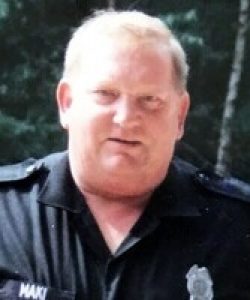 Retired Worcester Police Officer Paul E.A. Maki, 69 of Leicester, a dedicated husband, father, grandfather, and friend passed away Thursday, July 8, 2021, surrounded by the ones he loved.

Paul was born in Worcester, the son of Einar and Lillian (Leppilahti) Maki.  He graduated from Doherty Memorials High School, joined the U.S. Marine Corp, serving his country proudly during the Vietnam War.  Upon release from active duty, and return home, three months later September 3, 1971, he married the “Love of his Life” Shirley A. Buffone.   They began their life in Worcester before moving to Leicester in 1976.  They have lived there ever since.   Paul was working as a machinist for Norton Company.  He then took the Police Exam and appointed to the Worcester Police Department, serving the city for the next 37 years in the Patrol division, the Police Boat on Lake Quinsigamond and as a K-9 officer before retiring.

Paul is survived by his devoted wife and partner, Shirley; his son Douglas R.E. Maki, his wife Jessica and their two children, Anthony Raymond and Olivia Rose, the lights of Paul’s life; a sister, Barbara Allbright and brother-in-law, Barry Butler both of Jacksonville Florida; two nieces whom were a big part of his life, Tammy and Amy; extended family and a host of friends.   A sister, Judy Butler passed away in 2019.

A dedicated servant to the citizens of Worcester, Paul was an active member of the Worcester Police Union, the Police relief association, Pipes and Drums unit, honor guard and Police Credit Union.  A dedicated Marine, he was also a member, past commander and vice commander of the Vernon Hill Post 279, a member of the Worcester Detachment of the Marines Corps League, and the Paris Island Alumni Association, notably traveling with friends annually to Paris island to see and relive their training.   Paul was a 3rd degree member of the Pope John Council, K of C., and Our Lady of Loreto church.    Most of all he was Papa to his family, a devoted friend to everyone and able to offer advice to anymore who asked a question.   Paul and Shirley lived in a neighborhood full of friends, who enjoyed each other’s company so much, that during each of the holidays of the year, the neighborhood held block parties each sharing their turn as Host.  Pauls was the summer Clambake.   He loved to fish, especially with his son Doug and their friends fishing anywhere they could;  One such annual trip that Paul looked forward to was the New York State trip.    Paul also loved to traveled with Shirley.  They visited with friends Italy, enjoyed  cruises, Boothbay Harbor, the Cape, and several countries overseas.  Paul lived a full life of love, friends, and family.

Calling hours for Paul will be held, Wednesday, July 14th from 4:00 pm to 7:00 pm in the MERCADANTE FUNERAL HOME AND Chapel, 370 Plantation St.   His funeral will be held Thursday, July 15th from the funeral home with a procession to Our Lady of Loreto Church, 37 Massasoit Road, where his celebration of Christian burial funeral Mass will be  held at 10 am.  Burial with Military honors will follow in Worcester County Memorial Park in Paxton.