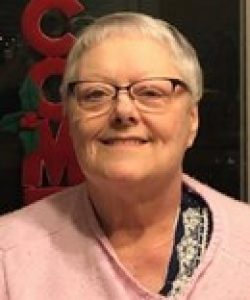 Section Garden of Heritage I Lot Number: 350Grave Number: B#4

Nancy C. (Domey) Chakuas, 64, of Worcester, died peacefully on Monday, October 7th in the comfort of her home while surrounded by her family after a brave fight with cancer.

Nancy was born in Worcester, daughter of the late Frederick and Loretta (Barrett) Domey and is also predeceased by a sister, Lorraine Conway.

She is survived by her beloved husband and caretaker of 42 years, Joseph P. Chakuas Jr.; two sons, Joseph P. Chakuas III of Worcester and Benjamin E. Chakuas of Olympia, WA; four sisters, Shirley Blomquist and her husband, George, Janet Rauktis and Patricia Dennison all of Worcester and Pamela Boiteau of Wakefield, RI; a granddaughter Caitlin M. Chakuas whom she adored; many nephews and nieces and her two beloved dogs, Jackson and Mia

She is a graduate of South High School and worked at several area nursing homes as a CNA and was also a PCA to her very close friend, Donna Murphy. Nancy also worked for a period of time at Quinsigamond Community College.

She was a member of Our Lady of the Angels Church and enjoyed playing cards. However, she was the happiest when she was spending time with her family.

The family would like to extend a heartfelt thank you to staff and volunteers of Dana Farber Cancer Institute and the VNA Care Network, especially Dr. Kenneth Kehl for the exceptional care and support that was given to Nancy and her family.

A funeral will be held on Thursday, October 10, from the Alfred Roy & Sons Funeral Home, 12 Hammond St. with a Mass of Christian Burial at 10 AM in Our Lady of the Angels Church, 1222 Main St. Burial will follow in Worcester County Memorial Park, Paxton. Calling hours are on Wednesday, October 9 from 4 to 7 PM in the funeral home. Memorial contributions may be made to either VNA Care Network Fund Development Office, 199 Rosewood Drive, Suite 180, Danvers, MA 01923 or to the Worcester Animal Rescue League, 139 Holden Street, Worcester, MA 01606.