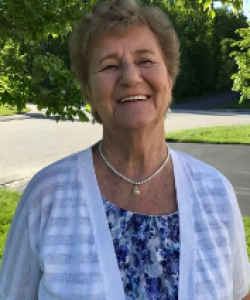 Place of Service Our Lady of Providence Church

Maureen was born in Cahersiveen, Co. Kerry, Ireland on August 17, 1943, and was one of five children of Michael and Hanora (Carey) O’Connell. Raised in Ireland, she emigrated to America in 1960 at 16 years old to live with her aunt. A few years later, she met the love of her life, Milton. They were married on August 17, 1963, and began their life of love, devotion, faith, and family. Together they cherished and raised four children in Worcester, MA. Maureen was the quintessential stay at home mother before working as a lunch aid for the Worcester Public Schools and then for Worcester State University in the department of food services. Her gentle, caring presence was a constant among the students. She eagerly retired in 1992 to enjoy all the benefits of being an overindulging grandmother.

Maureen was a lifelong, devote Catholic and member of St. Joseph’s Church, Auburn. She was a Eucharistic Minister, attended mass regularly and helped others through her prayers and faith. Maureen was extremely proud of her Irish heritage but was equally proud to have become a United States citizen on March 2, 1988. She enjoyed quilting, gardening, cooking and baking but much of Maureen’s time over the past 30 years was spent attending ball games, Irish step-dance recitals and art shows for her grandchildren. Nana never missed an event or opportunity to be their biggest cheerleader.

Maureen is survived by the family she loved so deeply; her husband of 58 years, Milton, four children, Colleen Snopkowki (Steve) of Charlton, Sheila Jette (Ed) of Sutton, Sean Moran (Nancy) of Worcester, Brian Moran (Sarah) of Glastonbury, CT; grandchildren Steven and Andrew Ninos, Caitlyn and Sean Moran, Samantha and Abby Snopkowski, Liam and Devin Moran, Caroline Gricus, Ryan, Ian and Ellis Moore, her sister and best friend, Geraldine DeMauro (Leonard) of Worcester, brothers Patrick O’Connell of Largo, FL and Michael O’Connell (Noreen) of Cahersiveen, Co. Kerry, Ireland, sisters-in-law and many nieces, nephews and cousins. Besides her parents, she was predeceased by her sister and brother-in-law, Bridget and James Kilcoyne, sister-in-law Ethel O’Connell as well as several members of the O’Connell and Moran families.

Maureen’s family would like to thank Dr. Ursula Collinson and Notre Dame Hospice Care, especially Miska Long, for their kind and compassionate care.

Family and friends will celebrate Maureen’s life with visiting hours on Friday, February 11th from 4:00 to 7:00 p.m. at MERCADANTE FUNERAL HOME & CHAPEL, 370 Plantation St., Worcester. A funeral Mass will be held at 11:00 a.m. on Saturday, February 12th at St. Bernard’s Church of Our Lady of Providence Parish, 236 Lincoln St., Worcester. Burial will follow in Worcester County Memorial Park, Paxton. In lieu of flowers, memorial contributions can be made to: Notre Dame Hospice, 555 Plantation St., Worcester, MA. 01605