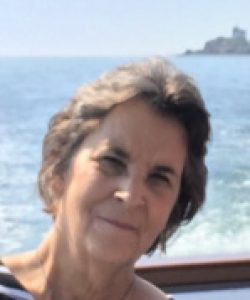 Mary C. (Chick) Haglund peacefully passed away on Sunday August 25, 2019. She was surrounded by her faithful husband of 44 years, Dennis, her son Dennis and his wife Jenna, son Joseph, her sister Donna and her husband James Gould, and her twin sister Jane and her husband Ray Hill at the Rose Monahan Hospice House in Worcester. She was 66 years old.

Born in Peekskill, NY to Lawrence M. and Jane (Sullivan) Chick, Mary was raised and educated in Shrewsbury, graduating from Shrewsbury High. Following high school, she then went on to study at Framingham State University. Mary was a long-time devoted employee at South County Physical Therapy and previously worked for several years at Life Care center of Auburn, where she worked as the Billing Office Manager at both companies.

It was in 1975 that Mary was married to Dennis and after a short time in Worcester they purchased their first home in Holden where they lived for 2 years. In 1978 the couple moved to Auburn to start their family and have lived there since. She loved to spend time with family and friends and giving back to others. This included her volunteering each year at the Relay for Life Cancer Charity Walk and several other charitable events. In her spare time, Mary loved to knit scarfs, blankets, and mittens for family and friends. However, those who knew her best will admit some of her most memorable times were the many trips to Ogunquit Beach in Maine with her family and friends and spending time with her 3 grandchildren and their families.

In addition to her beloved husband Dennis, Mary is survived by her loving sons, Dennis J. Haglund and his wife Jenna of Sutton, Joseph R. Haglund and his wife Beth of Phoenix, Arizona; her grandchildren, Lucas J., Avery E., and Samantha B. Haglund, who she adored so much and was known as their Nonnie; her sisters, Donna (Chick) Gould and her husband James, Jane (Chick) Hill and her husband Ray; and in-laws, Eileen Chick, Ed Haglund and Paulette, Carol Haglund, Jim Haglund and Patty, John Haglund, Brian Haglund and Jennifer, Jean Maynard and Gary, Theresa Haglund, Deborah Haglund, Lynne Haglund, Gary Haglund and Michelle; many nieces and nephews; and her longtime best friend Lisa Kalil Malesky. Mary was predeceased by her parents, Lawrence M. and Jane (Sullivan) Chick, by her brother, Lawrence M. Chick, Jr., brother and sister-in-law, Everett Mink and his wife Maureen, and sister-in-law Patricia Haglund.

Mary’s family would like to thank all of the doctors and staff of Mass General Hospital, Rose Monahan Hospice House, and of the VNA Hospice and Palliative Care.

Relatives and friends are invited to visit with Mary’s family between the hours of 9:00 AM and 11:00 AM on Thursday August 29, 2019 at the BRITTON-WALLACE FUNERAL HOME, 91 Central Street, Auburn, MA 01501, followed by a funeral Mass at 11:30 AM at St. Joseph’s Church, 189 Oxford Street North, Auburn, MA 01501. Burial will be held privately at the
request of Mary’s family. In lieu of flowers, memorial donations may be made to Massachusetts General Hospital Cancer Center in memory of Mary Haglund at https://giving.massgeneral.org/cancer/