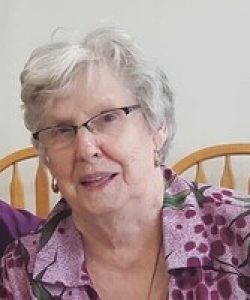 Section Garden of Heritage I Lot Number: 314Grave Number: B#4

Mary A. (Lush) Finnegan, 88, of Worcester, passed away early in the morning on Tuesday, February 8, 2022, in the comfort of her home, while surrounded by loving family.

Mary is also survived by a brother William “Bill” Lush and his wife Lorraine of Saint John’s, Nfld; two sisters, Patricia A. Green of London, Ontario, and Dr. Helen Patey of Saint John’s, Nfld; many nieces and nephews. She was predeceased by six brothers and sisters, Edward, Donald “Bud”, John, and Douglas Lush, Elizabeth Holmes, and Barbara Walsh.

Mary was born in Saint John’s, Nfld, daughter of the late, William J. and Anna (Martin) Lush. She graduated from the Presentation Convent School and after marrying Lawrence, she moved with him around the United States as he served in the U.S. Air Force, finally settling in Worcester to raise their family. She proudly became a U.S. Citizen in 1995.

Mary worked as a Teacher’s Aide at Roosevelt Elementary and Worcester East Middle School and had also worked as a Nurse’s Aide at Notre Dame Long Term Care. She was a devout member of Immaculate Conception Church and enjoyed being surrounded by her loving family. She enjoyed watching the Red Sox with her youngest son, jack, trips to Twin River Casino with her best friend Mary D, playing cards, cooking, and watching the Hallmark Channel.

The family would like thank Apple HomeCare, Overlook Hospice and Allways best care for allowing mom to be comfortable at home with her loving husband and family.

Calling Hours will be on Monday, February 14, from 4 p.m. until 7 p.m. in the MERCADANTE FUNERAL HOME & CHAPEL, 370 Plantation Street, Worcester. Her Funeral will be held on Tuesday, February 15, from the funeral home, departing at 9:40 a.m., in procession to a 10 a.m. Funeral Mass at Immaculate Conception Church, 353 Grove Street, Worcester. Interment will follow at Worcester County Memorial Park, Paxton.