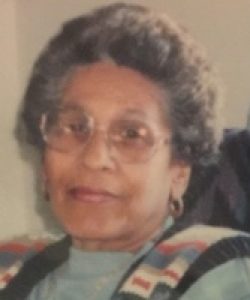 Marilyn V. (Wilson) Carlos Ward, 89, of Worcester, passed away in her sleep on Friday, May 15, 2020, at Christopher House in Worcester. She is reunited with her beloved son, Philip E. Carlos, and her first husband, Horace Carlos who both pre-deceased her.

Marilyn is survived by four children, Chuck H.S. Carlos and his wife Maryann of Worcester, Maureen L. Carlos of Worcester, Emily J. Carlos of Shrewsbury and Deirdre D. Ward of Worcester; a sister, Paula R. Fisher of Worcester; many grand and great grandchildren, nieces and nephews. She was predeceased by her former husband, Luther A.D. Ward, Jr.; three brothers, Leslie, John, and Oliver Wilson, and four sisters, Bernice Smith, Mabel Wilson, Laura Pearson, and Charlotte Carlton. She was born in Worcester, daughter of the late Leslie and Lena (Jackson) Wilson and has lived here most of her life.

Marilyn worked on the Mass Pike as a toll collector for many years, before she retired. She was a life-long member of John Street Baptist Church and was devoted to her children and grandchildren.

Marilyn’s family would like the wonderful “angels” at Christopher House and Summit Elder Care, for the wonderful care they gave to Marilyn while she was in there care.

Due to current restrictions on public gathering, funeral services will be held privately.

Her family will have a reunion and celebration of her life at a later date.

Interment will be in Worcester County Memorial Park, Paxton.