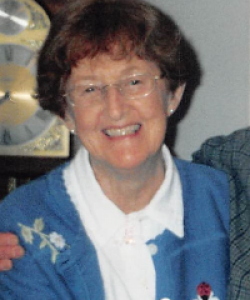 Marie V. (Kelly) Desrosiers, 92, of Worcester, passed away peacefully in the Milford Regional Medical Center on Sunday, January 8, 2023 after an illness.

Marie was married for 64 years to the late Paul G. Desrosiers, who passed on December 7, 2018. She was predeceased by a daughter, Mary Beth Desrosiers and is survived by a son, Michael Desrosiers of Worcester; two daughters, Mary Ann Sergeant of Merrimack, MA, and Kathleen LaPorte of Milford, MA; a brother James Kelly of South River, NJ and a sister Eileen Sousanes of North Brunswick, NJ; three grandchildren, Kara Sergeant, Will Sergeant and Nichole Desrosiers and many nieces and nephews.

Marie was born in South River, NJ daughter of the late, Edward and Wilhemina (Smith) Kelly, as one of nine children in the family. She was introduced to her future husband Paul when he was stationed in New Jersey after having served in the Korean War. They would later marry and raise their family in Paul’s hometown of Worcester. Marie was very family-oriented remaining close to her many brothers and sisters despite the distance from their hometowns.

Marie worked for many years as an EKG Technician at Fairlawn Hospital and was a member of Saint Peter’s Church. She enjoyed jigsaw puzzles, reading, and watching Formula One car racing. She was also a loyal fan of the New England Patriots. Marie loved animals, especially her cat Snowball and her grand dogs Emma and Sara.

Marie valued all the friendships she made with her neighbors on Courtland Street, as well as her newly created friendships during her activities at the Milford Senior Center.

The family will gather at 9:30 AM on Tuesday, January 17 in Saint Peter’s Church 929 Main St. Worcester with a funeral mass beginning at 10 AM. Burial will follow in Worcester County Memorial Park, Paxton. St Jude Children’s Research Hospital in Memphis TN held a special significance to Marie. Memorial contributions in lieu of flowers may be made in her memory to St. Jude’s Children Research Hospital 501 St. Jude Place Memphis, TN 38105. Alfred Roy & Sons Funeral Home 12 Hammond St. Worcester is directing arrangements.