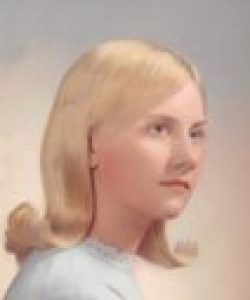 Linda J. (Andersen) Robert, 71, passed away peacefully at Cape Cod Hospital on Monday, August 19, 2019 with her sister, Carol Asplund by her side. Born in Worcester and raised in Holden, she was a daughter of the late Kenneth and Evelyn (Krieger) Andersen. She was the beloved wife of the late Paul R. Robert, who passed away in 1993.

After graduating from Wachusett High School in 1966, Linda began working as an inspector for Astra Pharmaceutical Company. She held many different jobs throughout the years but her true passion was sewing. In the late 1970’s, she worked for Morton’s Cloth in Concord, NH doing alterations and she sewed back braces for the clients of Worcester Orthopedics in Worcester. She was also a seamstress for Sessions Funeral Home in Worcester, sewing linings for their caskets. Linda enjoyed working at the Marcus Company in downtown Worcester from 1980-1983, altering beautiful wedding gowns for many excited brides-to-be. Linda and her sister Carol were the co-owners of Frocks’ N Frills, a successful custom clothing store at Union Place from 1983-1985.

Linda will be lovingly missed and remembered by her sister, Carol Asplund of Holden; her two step-sons, Timothy and Andrew Robert; a step sister, Joanne Ulfves-Garabedian of Worcester; and her nephews, Kurt W. Asplund of E. Lyme, CT, Erick S. Asplund of Phoenix, AZ and Dana R. Asplund of N. Grafton. In addition to her husband and her parents, Linda was predeceased by her step-sister, Karen Ulfves-Boyns.

Relatives and friends are invited to gather with Linda’s family from 3 to 4pm on Saturday, September 7 in the Miles Funeral Home, 1158 Main Street, Holden. A memorial service honoring Linda’s life will follow at 4 pm. A private burial will be held at Worcester County Memorial Park, Paxton. In lieu of flowers, memorial donations in Linda’s name may be made to the Worcester Animal Rescue League, 139 Holden Street, Worcester, MA 01606 or to the American Diabetes Association, PO Box 15829, Arlington, VA 22215.