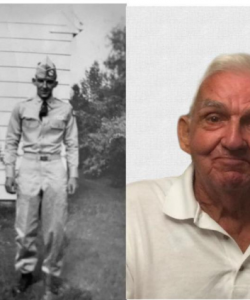 Ken graduated from Commerce High School in Worcester, MA. He joined the US Army and on his day of high school graduation in June of 1951 he was also completing his final jump requirements for his Airborne Paratrooper graduation in Fort Benning, GA. He was extremely proud and honored by being part of the 82nd Airborne family and all that it stands for.

Throughout his life Ken was actively involved in the 82nd Airborne-Orlando, Chapter L CO 508 ARCT, American Legion Post #4, Elks Club and Rutland Sportsman Club. He enjoyed being involved with friends from catering lobster bakes, helping to coordinate the Airborne conventions as well as enjoying weeks 38 and 39 at the Ocean East Resort in Ormond Beach where the family has vacationed together for over 30 years.

Ken enjoyed time fishing on Demond Pond and then off the dock at his home in Cape Coral, gardening, Family weekend on Cape Cod and the September vacation in Ormond Beach. He also loved to advise family members in proper cooking procedures and gardening for improved results in a way that only he could do. Ultimately, he enjoyed the warm weather living in the Southwest part of Florida and did not miss a day of snow or temperatures below 80 degrees.

Ken is predeceased by his sisters Joan Crook and Linda Eldredge along with his brother, Rod Glynn.

Calling hours will be held from 10:00 am to 11:30 am on Friday, April 29th at the Miles Funeral Home, 1158 Main St., Holden. Interment with military honors will follow at Worcester County Memorial Park, 217 Richards Ave., Paxton.