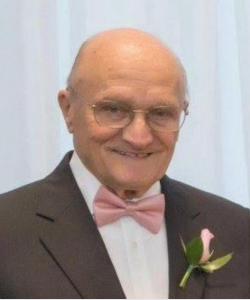 Don Lemenager passed away peacefully at the age of 87 On Tuesday, March 10, 2020 in West Palm Beach, surrounded by his loving wife, children and grandchildren.

Don was born on May 17, 1932 in New Bedford to Edgar Lemenager and Alfreda Renaud Lemenager. A veteran of the Korean War, Don graduated from Assumption College in 1956 and received his Masters and Honorary Doctorate from Worcester State University. He went on to teach and coach at Assumption Prep and was the Assistant Coach, to his lifelong best friend Andy Laska, at Assumption College where he was later inducted into the first Assumption Basketball Hall of Fame. For many years he was a teacher and coach at Boys Trade. He also spent time as the Athletic Director, Director of Evening School and Director of the Career Center. As the Assistant Superintendent, he was instrumental in transitioning the trade schools into the newly formed Worcester Vocational Schools. It was due to his involvement that he was named Superintendent of Worcester Vocational Schools in 1986, a role he remained in until he retired in 1993. Don was a long-time member of the Mass Retired Teachers Association and the Worcester Lodge of Elks. He spent his winters vacationing in Boynton Beach, FL and his summers in Old Orchard Beach, ME. He was an avid reader, loved “happy hour” and enjoyed studying and betting on his horse races.

Don leaves behind the love of his life, his wife of 62 years, Flora Lee Harris Lemenager; his five children, David of Florida, Don of New Hampshire, Dennis, Dan and his wife Tammy, and his daughter Nancy of New York as well as his daughter-in-law Jean; his brothers Roger and Normand and his wife Ann; brothers in-law Richard Harris and wife Patricia and Loney Harris and wife Marilyn; his grandchildren Alyssa Benefit, Corey Papia and her husband Jon, Jessica Martin and her husband Mark, Joseph, Kylie and Connor; five great-grandchildren Turner Benefit, Jordan Papia, Damien Gilliard, Finley Martin, Layla Gilliard and one more on the way.

Relatives and friends are invited to visit with Don’s family from 9:30 AM to 11:00 AM on Saturday, October 10 at Blessed Sacrament Church, 551 Pleasant Street, Worcester, followed by a Mass of Christian Burial at 11:00 AM. In lieu of flowers, donations can be made to the Assumption Basketball Team, 500 Salisbury Street, Worcester, MA 01609. Funeral arrangements are under the care of Miles Funeral Home, 1158 Main Street, Holden.