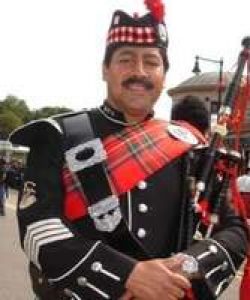 Jose’ A Ramos, 60, of Leicester, a retired Worcester firefighter and co-founder and former Pipe Major of the Worcester Fire Brigade Pipes and Drums, passed away with the family he loved by his side at home, Wednesday, October 13th, 2021, after a valiant battle with cancer.

Jose’ was born in Mayaguez, Puerto Rico, the son of Valentina Olivencia and Jesus Ramos.  Raised in New York and Worcester, Jose earned his bachelor’s and master’s Degrees in Mechanical engineering while serving as a full time firefighter.  In 1982, Jose was appointed to the Worcester Fire Department, and was stationed the majority of his career with the former Scope 1 at Central Division downtown and then with Ladder 1, at the new Franklin Street Station.  For the last three years of his career became the Car 3, District Chief Assistant at Headquarters on Grove Street before retiring in 2018.  While a line firefighter, Jose’ along with several others, founded the Fire Brigade Pipes and Drums, becoming an integral leader of its ascension to prominence as a respected group, performing on special occasions, parades, celebrations, and special moments around New England and beyond.

Jose’ is survived by the “love of his life” for the past forty years, Eileen (Quinn) Ramos; the three children he cherished and was so proud of; Jose A. Ramos Jr., Cecilia A. Ramos, Shaira M. Recalde and her husband Jorge; six adored grandchildren, Christian, Jaizay, Shayla, Anieva, Anthony and Alahya; his mother, Valentina; brothers, Miguel Ramos, Wilson, Edeit, Edwin, Frankie and Wilsito Montalvo; two sisters, Damaris Antuna, and Lucy Grajales; Many nieces, nephews, extended family and a large number of friends.

Jose’ was a proud member of the Worcester Fire Department family, the Local 1009, IBFF Union, the Worcester Fire Credit Union, and the Massachusetts Genealogy Society.   A devoted husband, father, grandfather, and friend; Nothing in his life came before his family.  They were his life’s inspiration and remained devoted to them through all life’s challenges.  Jose’ could always be found donating his time and talents.  He could fix anything and those he couldn’t he would learn it and then master it.   Creating many useful things, inventing them from scratch out of any kind of material.  An inventor, craftsman of sorts.   Most notable were the bagpipe Chanter’s which were requested from all over the world.  Volunteering his musical talents for anyone who asked, for the St Patrick’s Day Parade, Martin Luther King Celebrations and many of other occasions to include weddings, funerals and other special moments in his families and friends lives.  Jose’ was a close family man and could always be found attending his daughter’s activities notably their involvement in CDW dance recitals and competitions.

Friends and relatives are invited to calling hours Sunday, October 17th from 3 pm to 6 pm at the MERCADANTE FUNERAL HOME & CHAPEL, 370 Plantation St., Worcester, MA.  His funeral mass will be held Monday, October 18th at 11:00am at St. Bernard’s Church, 288 Lincoln Street, Worcester, MA.  A procession to his burial will follow in Worcester County Memorial Park in Paxton, MA.  In lieu of flowers memorial remembrances in his name can be made to a cause he so loved; the Worcester St. Patrick’s Day Parade Committee, PO Box 708, Worcester, MA 01602.