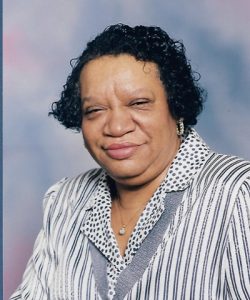 Subscription Update Obituary
After a full life of laughing, listening, advising, helping, and loving, Johnnie A. Young was called to rest on August 1, 2019.  She was 77.

Johnnie was born on November 1, 1941, in Knoxville, TN.  She was one of four children born to the late Emory B. Young, Sr. and Frances (Yette) Young.  She came to Worcester in October of 1960.

She leaves to cherish her memory three brothers, Bronwyn L. Young, Sr. and his wife Cynthia of North Augusta, SC, Emory B. Young II of Knoxville, TN and John W. Young and his wife Janet of San Antonio, TX; a mother to many, including Leslie Davis and her husband Glendie of Coaling, AL, Carolyn Little and her husband Robert of Tuscaloosa, AL, April Baez and her husband Armando of Worcester, MA; nieces, Brandy M. Young of Birmingham, AL, Jada Young of San Antonio, TX, Casi Young of Charlotte, NC and Anya Young of North Augusta, SC; nephews, Bronwyn L. Young II of Charlotte, SC and Eliam Young, Knoxville, TN; a devoted loyal friend, deLois Wilson of Worcester and a host of beloved relatives and friends.

Johnnie was a Clinical Performance Improvement Specialist for UMass Memorial Hospital for thirty years, retiring in May 2013.

Johnnie was always giving herself to the Worcester community.  She belonged to the Hokemis Temple #36.  She sponsored the Eva L. Kennedy Marching Unit for many years.  Ms. Young served as Vice President of the Miss Black Worcester Paget for nine years as well the Vice President of the Beauty & Talent Department of New England States of Eastern Canada Association for many years.

Johnnie was a member of Belmont A.M.E. Zion Church where she was a class leader, health & wellness department and was on the trustee board.  She was the past President of Alley Irving Usher Board and Vice President of the Unity Usher Board.

A period of calling hours will be held on Tuesday, August 13, 2019, from 10:00 am to 10:45 am with her funeral service to begin at 11:00 am in Belmont A.M.E. Zion Church, 55 Illinois Street, Worcester.  Burial will follow in Worcester County Memorial Park, Paxton. MERCADANTE FUNERAL HOME & CHAPEL, 370 Plantation St., Worcester is honored to be assisting the family with arrangements. In lieu of flowers, memorial contributions can be made to Belmont A.M.E. Zion Building Fund, 55 Illinois Street, Worcester 01610.