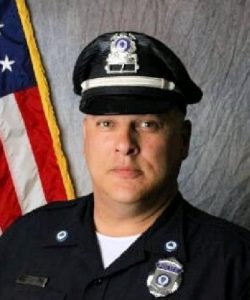 Detective John D. Songy passed away on Friday, May 29, 2020 after a courageous battle with coronavirus. He was 48. Born in Baton Rouge, Louisiana, John was the son of Alfred and Elaine (Galeckas) Songy of Spencer. John was raised in Spencer and a graduate of Worcester Vocational Technical Institute.

He worked several years as a machinist at Service Network and Heald Machine Company. After attending the criminal justice program at Quinsigamond Community College in Worcester, John embarked on his new career and accepted a patrolman position with the Oakham Police Department where he worked for several years. He joined the Rutland Police Department in 2012 and served the last several years as the department’s detective. He received numerous commendation over the years.

John had an adventurist spirit and enjoyed the great outdoors. One of his favorite past times was four wheeling off-road with his appropriately detailed Rubicon Jeep. He loved traveling throughout the country with his wife Joanne; visiting family, attending Jeep rallies and related events. If not four-wheeling with Joanne, they could be found hiking trails together throughout the northeast including Buffumville Lake, Lonesome Lake Trail, Blueridge Mountain Trails. He was a member of the Freedom Trail Riders and Underground Jeeps. Many of his fondest memories were spent with his father on their annual trips visiting family in Louisiana.

“He has a heart of gold and he’s the kind of guy that would do anything for anybody,” according to Rutland Police Chief, Nick Monaco. John cared about everyone he met and passionately dedicated his life to keeping others safe. He fell in love with his community and they fell in love with him.

John embraced his role as a husband and father. He made sure that every holiday was spent at his family’s home where he put his culinary talent to work with a buffet style dinner with leftovers that would last for days.

Calling hours will be held from 4 to 8 pm on Wednesday, June 3, at Miles Funeral Home, 1158 Main St., Holden (appropriate COVID-19 protocol will be observed including face masks and social distancing). A funeral Mass will be celebrated at 11 am on Thursday, June 4, at St. Patrick’s Church, 258 Main St., Rutland (church seating will be reserved for members of the family and Rutland Police Department personnel). Immediately following John’s Mass, a final tribute will be a procession to the Rutland Public Safety Building for a moment of silence. Burial will be held privately at a later date at Worcester County Memorial Park in Paxton. John’s Mass will be live streamed from the St. Patrick’s Church Facebook page, and will be audio broadcasted outside the church. In lieu of flowers, memorial contributions may be made to Sweetpea F.O.R. Animals, 1090 Pleasant St., Paxton, MA 01612.