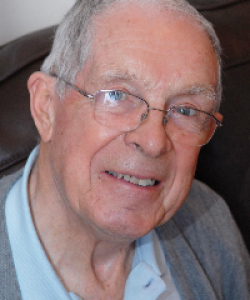 He was born on September 18, 1927 in Moher, Upperchurch, County Tipperary to Owen Darmody and Bridget (Younge) Darmody. He served faithfully in the US Army for 2 years before becoming a proud citizen of the USA. He married the love of his life, Anna (Tangney) Darmody, on November 11, 1955. He was a man of integrity and steadfast devotion to the Catholic faith and to his family. He viewed the world in terms of black and white, right and wrong, and relied on Anna to bring color to his world. He had a long a career in manufacturing at US Envelope as part of the Paper Workers Union and Astra Pharmaceuticals, followed by a career in custodial work at Anna Maria College and Madigan Construction. He always believed that the type of work that you did was less important than your dedication to do your best every day. He was an enthusiastic volunteer with the Boy Scouts of America, RSVP Worcester, and the PTA.

Jerry will be remembered for his quiet persistence in always doing the right thing. As an immigrant, he always welcomed and assisted others who made his adopted country their home. He remembered the pain of poverty and hunger and assisted those in need throughout the world. Jerry always tried to do his part to make the world a better place and never sought recognition or acclaim. His proudest accomplishment is the education of his wife, children, and grandchildren.

Funeral services and burial in Worcester County Memorial Park, Paxton will be private. A memorial service will be held at a later date. In lieu of flowers, contributions can be made to Notre Dame Educational Bridge Center, 555 Plantation Street, Worcester, MA 01605. O’CONNOR BROTHERS FUNERAL HOME, 592 Park Avenue, Worcester is assisting the family with arrangements.