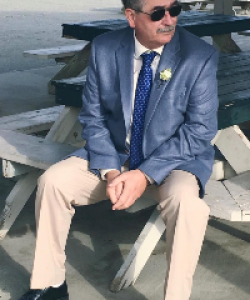 James R Sullivan Sr 75 passed away February 7, 2022 at UMASS Memorial Hospital Worcester
He leaves his wife of 48 years Tina (Billis) Sullivan, their children Michael J Sullivan and his wife Colleen of Paxton, James R Sullivan Jr and his wife Kelly of Douglas, Steven C Sullivan and his wife Katie of Shrewsbury and Stephanie Sullivan and George Sullivan of Charlton, 7 Grandchildren Deanna, Drew, Sydney,Taylor, Kylie, George, and Lydia and his golden retriever Charlie. He was born in Worcester September 23, 1945. Son of late James M and Pearl (Raymond) Sullivan. Moved to Charlton in 1978. He was a 1964 graduate of Oxford High School. He was a veteran of the U S Navy and was honorably discharged.

He worked for Pratt & Whitney Aircraft for over 40 years retiring in 2006. Hi liked to walk his dog, going out to eat with his family, watch football and Doing his yard work at home. Funeral Service will be Friday, February 11, 2022 at 11 AM in Sts Constantine and Helen Greek Orthodox Church, 35 Lake Parkway Webster ,Ma. There will be a visitation hour from 10 to 11 AM at the church followed by burial with military honors at Worcester County Memorial Park in Paxton. In lieu of flowers memorial contributions may be made to Sts Constantine and Helen Greek Orthodox Church, P O Box 713, Webster, MA 01570. The ROBERT J MILLER Funeral and Lake Chapel, 366 School Street, Webster,MA is honored to be assisting the family with the service.