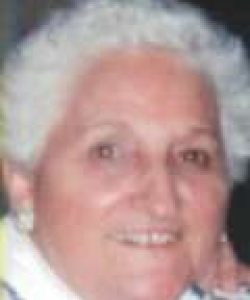 Mrs. Irene (Buffone) Borowy, 85, passed away Sunday, June 29th at her home surrounded by her family.

Irene was born September 12, 1922 in Worcester, Massachusetts, a daughter of the late Vincenza “James” and Scavonia “Maria” (Coshignano) Buffone. A lifelong resident, Irene was educated through the Worcester schools. She was a full-time Mom who enjoyed being with her husband, children, and grandchildren. She was an avid bowler who also enjoyed blueberry picking, and the beach. Irene was a member of Christ the King Church of Worcester and also the church’s Women Guild.

Her funeral will be held Wednesday, July 2nd from FAZIO FUNERAL HOME, 9 Branch St., Worcester with a Funeral Mass at 10:00 a.m. at Christ the King Church, 1052 Pleasant St., Worcester. Burial will be in Worcester County Memorial Park Cemetery, Paxton. Visiting hours will be Tuesday from 5 p.m to 8 p.m. Funeral arrangements under the direction of Louis M. Fazio Jr. and Louis M. Fazio III.