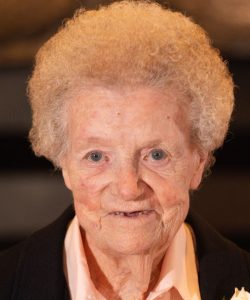 Ida F. (Davis) Freniere, 96, of Shady Lane, died Monday, November 22, 2021, at Beaumont Rehabilitation and Skilled Nursing Center in Westborough. She was predeceased by her husband of 73 years, Raymond E. Freniere Sr., who died in 2017. She is survived by three children, Cheryl Dagnese and her husband Richard of Worcester, William M. Freniere of Webster, and Raymond J. Freniere of Dudley; seven grandchildren and four great grandchildren. She was predeceased by five brothers, Reginald Brewster, Raymond Davis, Charles Davis, Robert Davis, and Frederick Davis. She was born in Worcester, daughter of the late John and Edna (Hazard) Davis, and lived in Auburn before moving to Oxford in 1965.

Mrs. Freniere was a homemaker, caring for her home and family throughout her life. She enjoyed playing Bingo.

A private graveside service will be held at Worcester County Memorial Park in Paxton. In lieu of flowers, memorial contributions may be made to the American Cancer Society, 3 Speen St., Suite 250, Framingham, MA 01701. Paradis-Givner Funeral Home in Oxford is directing the arrangements.