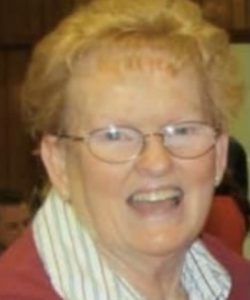 Helen M. (Barber) Beauregard, 85, of Haverhill, and formerly of Plaistow, NH, died on January 9, 2021 at the Hannah Duston Nursing and Healthcare Center in Haverhill, after a courageous thirty-seven year battle with Multiple Sclerosis.

The daughter of the late Valentine and Helen (Mahoney) Barber, she attended St. James High School, graduating with the Class of 1953, and also attended the Chandler School in Boston. She went on to receive her certification as a Licensed Practical Nurse through the nursing program at Haverhill Trade School. Helen began her career as an L.P.N. at the Glynn Memorial Nursing Home and also worked for the Haverhill School Department in the Head Start Program and for the Hannah Duston Nursing Home until her retirement.

A member of the former St. Joseph Parish and All Saints Parish, she was also a member of the Carl Davis Post Ladies Auxiliary of Plaistow and the AmVets Post 147 Ladies Auxiliary of Haverhill. In 1985, she founded “The Upbeat Connection”, an M.S. support group, which she ran until 2015 and organized many golf tournaments, dinners and benefits to raise money and awareness for M.S. She was also a supporter of the Crisis Pregnancy Center in Haverhill.

Private family funeral services were held at Brookside Chapel & Funeral Home, 116 Main St., Plaistow, NH, with burial in Saint Joseph Cemetery in Haverhill. Donations in her name may be made to the St. Vincent de Paul Society of Sacred Hearts Parish, 48 So. Chestnut St., Bradford, MA 01835.