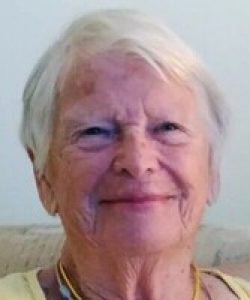 Harriet F. (Nichols) Consiglio, 96, of South Dennis, formerly of Worcester and New Hampshire, passed away with her devoted son gathered by her side, Monday, January 9, 2023. In heaven, Harriet is welcomed into the arms of her husband Frank and son Lawrence and his wife Nancy.

Harriet was born in Worcester, August 11, 1926, the daughter of Charles and Alice (Miller) Nichols. Raised and educated in Worcester, Harriet married the ‘Love of her Life’ Frank ‘Peewee’ Consiglio, and spent the next 57 years, dedicated to each other and their family in Worcester, New Hampshire and South Dennis until Frank left her side on December 27th, 2002. She has lived on the Cape for the past 43 years.

Harriet was a member of Our Lady of the Cape Church, its lady’s guild and volunteered in its thrift store. She was also a member of the Cape United Elderly Association and a former member of St Margaret Mary Church in Worcester. Harriet loved to travel and did so extensively with Frank. Considered “Snowbirds”, Frank and Harriet could be found enjoying Florida in the Winters. She was dedicated to her family and spent the greatest moments in her life with her family, especially all her grandchildren.

A period of calling hours will be held Tuesday, January 17th from 9 am to 10:30 am in the MERCADANTE FUNERAL HOME & CHAPEL, 370 Plantation St Worcester, followed by a procession to St Anne’s Church, 1340 Boston Turnpike Rd where her funeral mass will be celebrated at 11 am. Burial next to Frank will be in Worcester County Memorial Park in Paxton. In lieu of flowers memorial remembrances in her name can be made to The Alzheimer’s Association of Massachusetts/New Hampshire.