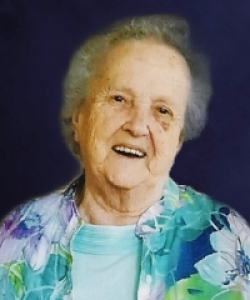 Eveline was married for 54 years to the late Armand J. Legere who died in 2007. She is survived by a son, Mark J. Legere and his wife, Denise of Worcester; four daughters, Jeannette M. McCarthy and her husband, Rick of Ormond Beach, FL, Cecile M. Burke and her husband Tim of Oxford, Dianne M. Seferi of Oxford and Joanne M. Ross and her husband Jim of Grafton; her daughter-in-law, Mary Legere of Spencer; three brothers, Camille Babineau, Edmond Babineau and Aurele Babineau; a sister, Laudia Hebert; 12 grandchildren; 12 great grandchildren : 3 great-great-grandchildren, and many nephews and nieces.

Eveline was born in Grande-Digue, New Brunswick, Canada daughter of the late Edelbert and Laura (LeBlanc) Babineau and is also predeceased by a son, Ronald Legere; a grandchild, Matthew Seferi; three brothers, Eugene, Valmont and Robert Babineau and a sister, Doris Leger.

Eveline followed her husband to Worcester and set about raising their family, leaving her own family behind in Canada. When she wasn’t tending to her children, she spent many hours remodeling their home, something she had a passion for. She would take on any task from dismantling partitions to hanging sheet rock, or “sheeprock” as we heard it. There was nothing more fun to watch than her and Armand telling each other how to do something in the project.

As her children got married and left the nest, instead of sitting back and relaxing a little, she took on the task of ‘day care’ by watching her own grandchildren as well as others so that the parents could work. She never got tired of caring for the little ones, whether it be head rubs and back scratches, making pancakes shaped like Mickey Mouse, or singing Silent Night until they fell peacefully to sleep. The woman always had a smile and a kind word for anyone she came in contact with even to her final days. Who do you know that has doctors and nurses call to ask “how is Meme doing today?”

Going up to New Brunswick every summer to be with her family was the most exciting time for everyone. The stories of times had on the farm, of gathering with cousins, and breaking out the guitars and violins and having a long night of singing and joking around are endless. Laughter was definitely prevalent whenever they got together.

It was wonderful to have so many years with her being healthy and enjoying the legacy she has left behind. The family was pretty busy and produced enough children that she could gain the title of great great grandmother. Each baby that came into her arms was as loved as the first one she ever held. She touched a lot of people and has left warm spot in a lot of hearts.

Due to the COVID-19 pandemic the funeral services for Mrs. Legere are being held privately with burial next to her husband in Worcester County Memorial Park, Paxton. Memorial contributions in memory of Eveline may be made to either Rose Monahan Hospice Residence c/o VNA Care Network 120 Thomas Street Worcester, MA 01608 or to the Make A Wish, Gift Processing, 1702 East Highland Avenue, Suite 400, Phoenix, AZ 85016.