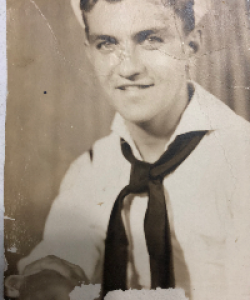 Mr. Richard was one of 14 children and was born in Mexico, Maine son of the late Camille and Leonie (Thibodeau) Richard. Ernest is also predeceased by three brothers, Rene, Albert and Gerard Richard and 5 sisters, Edna Richard, Rose Bourgea, Rita Peters, Evelyn Cormier and Lillian Richard.

Mr. Richard graduated from South High School in Worcester and proudly served in the United States Coast Guard during World War II. He worked his entire career as a carpenter and a skilled cabinet maker. He worked for a period of time with the Carpenter’s Union and then was self-employed for the majority of his career.

Ernest was a member of Our Lady of the Rosary Church in Worcester and the VFW Post #6907 in West Boylston. Mr. Richard could often be found in his workshop crafting his trade of woodworking, but he was truly the happiest when he was surrounded by his grandchildren and his great grandchildren.