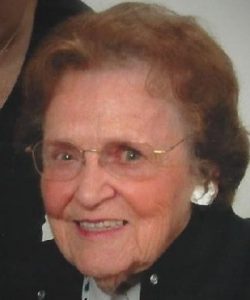 Eileen M. Quirk died peacefully at home, under hospice care, on Tuesday, 12 November, in the company of her family.

She was born Eileen M. Pickett in Hingham, Massachusetts on September 25,1920, the daughter of Eileen (Burns) and Gilbert Pickett.

She graduated from Hingham High School in 1938, known for her brash play on the field hockey pitch, first violinist in the school orchestra, and valedictorian. Eileen earned her Business Degree from Simmons College in 1942 and, while working summers at the Tower Hotel in Falmouth, Massachusetts, she met her future husband John T. Quirk. They were married on January 15, 1944, as John prepared to depart for England as a Medical Corpsman in the U. S. Army. During World War II, Eileen worked at the Naval Accounting Office at the Bethlehem Hingham Shipyard. She savored recounting tales of taking the train to Boston with her girl friends after work or on weekends. They enjoyed shopping, dining in Chinatown, and the treat of a hot fudge sundae at Bailey’s Ice Cream. They survived rationing by using an eyebrow pencil to suggest the seam of silk stockings, banned by the war effort, and long walks home from the Hingham Train Station in the total darkness of nightly blackouts protecting against German submarines off the New England coast.

Following the War, Eileen and John returned to Worcester, Massachusetts, where John resumed his 45-year career working at The College of the Holy Cross, eventually assuming the role of Director of Food Services at Kimball Hall. John died in 1985, just weeks after celebrating, with Eileen, their 41st Wedding Anniversary.

In Worcester, John and Eileen raised their 4 children, Eileen, Maureen, Thomas, and Kathleen. While raising her children, Eileen was active in school and church organizations, particularly for parents of sons at St. John’s High School, with her great friend, Mary Keenan, and endless hours for Notre Dame Academy, especially the annual Holiday Bazaar fundraiser.

With her children growing up, Eileen returned to school and received her Master’s Degree in Education from Assumption College, completing her reading coursework at Worcester State College. She was, for many years, a reading teacher in the Worcester Public Schools, including the Canterbury Street, Harlow Street, St. Nicholas Avenue, and Chandler Street schools. She was a loyal member of the Guild of Our Lady of Providence, the Blessed Sacrament Friday Afternoon Club, and the Faculty Wives Club at Holy Cross College.

Eileen always maintained great interest in politics (local and national), science, education, and world events. She assiduously followed her favorite sports teams, the Boston Celtics and the Boston Red Sox, delighting in the SOX, at last, winning the World Series in 2004. Subsequent World Series victories were icing on the cake. Always excited by the latest technology, she continued reading her beloved books and playing her solitaire daily challenge on her Kindle. She shared her interests with her children, grandchildren, and great-grandchildren, texting on her iPhone….delighting in the use of endless emojis.

Eileen was a member of the Pickett Family FAB FOUR with her brother Robert and her sisters, Virginia and Carolyn. They all loved the ocean starting with their childhood forays to Nantasket Beach and years at Harwich and Falmouth on Cape Cod. They particularly enjoyed their adventures aboard the Windflower II, sailing from Harwich to Newport, Nantucket, and Martha’s Vineyard, and on long voyages as far as the Bahamas and the Abacos.

Eileen was a special Gramma to eight grandchildren: Dennis (and Michele) Fitzgibbons of Marlborough, CT, Ryan (and Megan) Fitzgibbons of North Falmouth, MA, Sean (and Maria) O’Connell of Framingham, MA, Erin (and Eric) Taylor of Cape Elizabeth, ME, Jack, Sam, and Maggie Mohs of Fairfax, VA, and Brian Broadaway of Waltham, MA. She blessed the lives of her nine great-grandchildren: Tyler and Cameron Fitzgibbons, Jack and Ellie Fitzgibbons, Maureen, Richie, and Steven O’Connell, and Grace and Hope Taylor.

The wake for Eileen M. Quirk, will take place from 5 PM to 8 PM on Thursday, 14 November, at the Athy Memorial Home, 111 Lancaster Street, Worcester.

Our family extends a special thank you to Safiatou “Sophie” Sanyang and to the Worcester Hospice/Palliative Care Team who enabled Eileen to remain at home during her last days.

In lieu of flowers, our family requests that donations may be made to The UMass Memorial Foundation “In Memory of Eileen M. Quirk”, specifically dedicated to the Ajit S. Puri, MD, Research Fund. Dr. Puri is The Division Chief of Interventional Neuroradiology. Please mail donations to: Office of Advancement, UMass Memorial Medical Center, 333 South Street, Shrewsbury, MA 01545