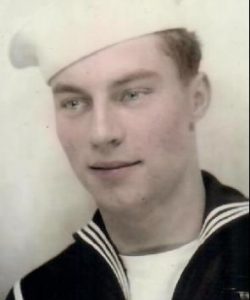 Edward J. Cantara, 96, of Leicester passed away after a brief illness at Boston Medical Center, on Wednesday, May 5th, 2021.

Edward (Pete) was born on February 16, 1925 in New York City, and grew up in Spencer. He was the only child of Rita Cantara. He was predeceased by his wife of 63 years, Teresa Quinn. He leaves his daughters Sighle Philbin and her husband Philip Philbin of West Boylston, Marisa Ayvazian and her husband Dr. Philip Ayvazian of Upton, and a stepdaughter Sharon Bridgford of Worcester. He also leaves his five grandchildren: Tanya, Anthony, Ariana, Ariel, and Jack, as well as two great grandchildren: Landon and Hannah.

Pete served in the United States Navy during World War II on the USS Hall (DD 583). He was awarded the World War II Victory Medal; American Theatre Medal; Asiatic-Pacific Theatre Medal-6 stars; Philippine Liberation Medal-1 Bronze star; European-African-Middle Eastern Theatre Medal and Philipi Madora Medal-1 Silver Star. He worked as a carpenter until his retirement at the age of 75. He took pride in his handiwork, which was impeccable, and even put a new roof on his house at the age of 83. He was an avid fisherman, loved boats, and enjoyed watching football.

A Memorial Mass will be held on Friday, June 11th, at 10 am. in St Pius X Church at 1153 Main Street, Leicester, MA. His burial with military honors will follow at Worcester County Memorial Park in Paxton. A calling hour with Covid 19 precautions, will be held from 8:30 am to 9:30 am prior to the church service in the Morin Funeral Home, 1131 Main Street, Leicester, MA. In lieu of flowers, contributions may be made to the Lake Sargent Association at 32 Lake Avenue in Leicester, MA 01524.