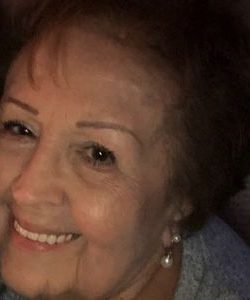 Edith M. Gubber, 88 of Auburn, Worcester went home to the Lord on April 11, 2020. Edith was born January 10, 1932 in Ware, MA to Charles and Mary (Shultz) Williams and lived in Warren, MA. During the depression the family moved to Worcester, MA where she met and married the love of her life Richard E. Gubber on October 24, 1951. They quickly started a family of six children. Richard started a lifelong career as a Podiatrist while Edith raised the children.

Edith had a passion for life, an amazing spirit, a gift for gab and a flare for doing the impossible. While raising her children she volunteered for the Woman’s Guild and participated in community fundraising. She was always ready to volunteer for the church and Bazaars involving her children as their strong roll model. She was a true matriarch and provided love, care and guidance to everyone including those who became extensions of the family.

She constantly redesigned rooms in her home honing her decorative skills. As her children got older, she attended nursing school at Girls Trade and became a Licensed Practical Nurse in 1972. She started as a floor nurse at Memorial Hospital. Soon she moved to the Emergency Room where she worked for many years. She ended her hospital career as a full-time Dialysis nurse. Then in 2001 she joined the family practice at New England Regional Headache Center where she found her niche with headache patients and a fighter of insurances and pharmacies for her patients. They loved her so.

Despite her work, her family meant everything to her. In younger years, summer vacations were spent at Green Harbor where many Worcester friends gathered. She loved picnics with the extended family, the whole Gubber clan at Leominster State Park and Rutland State Park, taking Sunday rides and singing the entire way. Holidays were the highlight of family gatherings. Most were spent at the family homestead on June Street and later at daughter Doreen’s where everyone celebrated life and family.

Her beloved husband, Richard Gubber, preceded her in 1996; She is survived by a son David Gubber of PA and his wife Donna; three daughters, Dianna M. Gubber-Markley of Princeton and her husband Herbert, Denise A. Prue of Worcester and Doreen E. Gubber of Millbury. A sister Mary-Ann Shull of Ohio. Nine grandchildren, David, Mary, Timothy, Kirsten, Kaitlin, Kayleigh, Emily, Nathaniel to whom she stood guardian and Joshua. She had eight great grandchildren. Two sons, Dean Gubber died in 1987 and Daniel in 2019.

A celebration of life will be held in the future. Go with the angels Edith and sit close to the Lord our God. Arrangements are in the care of the Callahan, Fay & Caswell Funeral Home, 61 Myrtle St., Worcester.