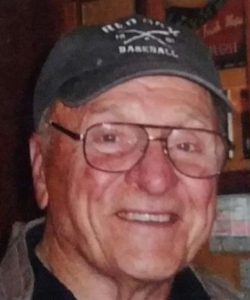 Donald I. Garfield (formerly of Worcester, MA) passed away on November 29, 2019. He was born on December 8, 1925 in Boylston, MA to Ralph and Mildred (Pearson) Garfield.

Donald served in the United States Army during World War II and received a Purple Heart in the Battle of the Bulge. He worked as a building contractor in Worcester County for many years and, in his retirement years, as a product demonstrator for BJ’s Wholesale Club throughout his eighties.

He was a Little League coach in his young adulthood and an avid Boston sports fan, as well as an accomplished bridge player. He was possessed of a curious mind and sharp wit, enjoying all manner of puzzles and games, especially with family and friends.

He is survived by his daughter, Pamela Hoskins and her husband Bruce of Derry; his son Stephen Garfield and Stephen’s partner, Donna Sundin of Worcester; four grandchildren; one great-grandchild; his sister Carol Wetmore; and many nieces and nephews. He is predeceased by his ex-wife Pauline (Young) Garfield; brothers, Vernon Garfield, Robert Garfield; and his sister, Faye Brigham.

A graveside interment service will be held Tuesday, October 13, 2020 at 11:00 AM at Worcester County Memorial Park, Paxton, MA. In lieu of flowers, donations can be made to the St. Jude Children’s Research Hospital or ASPCA.