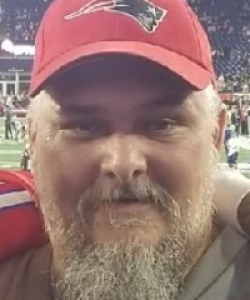 Colin R. Campbell, 54, of Holland, MA, died Tuesday, September 24th in Harrington Memorial Hospital. He is survived by his wife, Luana (Carter) Campbell of Spencer; two daughters Crystal L. Campbell of Southbridge and Elizabeth A. Campbell of Fiskdale; two sons, Colin A. Campbell of Smithfield, RI and Dylan S. Campbell of Holland; his mother, Doris L. (Myra) Campbell of Dudley; his brother, Mark Campbell and his wife, Stephanie of Dudley; his sister, Wendy Kokernak and her husband, David of Webster; three grandchildren, Juliana, Kinslee and Carter; and many nieces and nephews.
Colin was born in Worcester, his father was the late Colin F. Campbell. He had been employed by the former Norton Company as a machinist until his retirement. He had also served as a volunteer firefighter in Holland, and coached sports. His love of the Patriots and the Red Sox often found him taking to his car to listen to the game in close situations, as he found it difficult to sit still during these intense final minutes, and felt it was his way of bringing the teams good luck. Colin will be remembered for always putting others before himself and intense love of God and family.
His memorial service will be held on Monday, September 30th at 11:00 a.m. in O’CONNOR BROTHERS FUNERAL HOME, 592 Park Avenue. A visitation will be held from 10:00 o’clock until the time of the service at the funeral home.