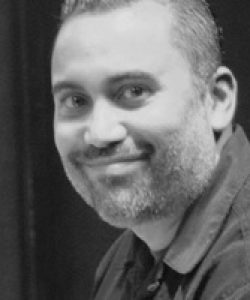 In the words of his hero, Batman…”It’s not who I am underneath, but what I do that defines me”.  Underneath he is simply a man, but his character was defined by his actions of being a loving husband, father, son, brother, and friend; making Christopher Guzman a truly remarkable human being.

Christopher J. Guzman, 45, of Worcester, passed away in the comfort of his home, surrounded by his loving family, after a valiant decade long battle with brain cancer.

Chris was born in Worcester and moved to the Dominican Republic with his family as a toddler; where he grew up before returning to Worcester when he was 16 and graduating from Burncoat High School.  He then earned a degree in music engineering from Mass Communications College, before moving to Shrewsbury, finally settling back in Worcester in 2013.

Chris held many roles at Bose Corporation where he worked for nearly twenty years.  He was a talented keyboard player playing with many local bands over the years, and was a long-time band member of “Mindrift”.  He was a huge Batman fan and aficionado.  He loved playing video games and was a comic book enthusiast.

What defined Chris most was his love of family, his desire to help others, and his tremendous, quite often sarcastic, sense of humor.

Calling Hours for Chris will be on Wednesday, October 2, from 4 p.m. until 7 p.m. in MERCADANTE FUNERAL HOME & CHAPEL, 370 Plantation Street, Worcester.  His Funeral Service will be on Thursday morning at 11 a.m. in the funeral home.  Interment will follow at Worcester County Memorial Park in Paxton.

In his spirit of helping others, Chris donated his brain to Harvard Brain Tissue Resource Center for further study, to help understand more fully the effects of brain cancer.  It is in that spirit of giving, and his love for music that his family requests that in lieu of flowers, donations in his memory be made to The DREAM Project, 13 Winter Lane, Milton, VT 05468.