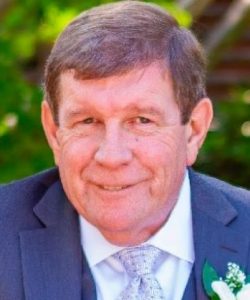 One of Brian’s greatest joys was his role as “Baba” to Nicholas, Grace, Sierra, Ruth, Clare and Luke. His grandchildren will forever cherish the time they spent with him.

Brian graduated from Colby College, in Waterville, ME and went into a career in computer sales. He found a second career at L.L. Bean in Maine in customer service where he happened upon a long-lost friend on one of his late-night calls. He later moved to Worcester to marry Vicky and worked, until the time of his illness, at The Home Depot in Shrewsbury where he made many close friends.

Brian was a lifelong fan of Boston sports teams and jumped at any chance to attend a game. He enjoyed golfing, spending time on Cape Cod, visits to Albion and vacations to Sanibel Island. Brian loved a good joke, an episode of Blue Bloods or a Dairy Queen blizzard at any time. His life was well lived.

Brian’s family would like to express their heartfelt gratitude for the excellent care that Brian received at the UMass Memorial Medical Center University Campus. They are especially grateful to the staff of the Oncology and Radiation Departments for their caring and support.

Calling hours will be Thursday, December 19th, from 4 to 6 p.m. with a memorial service immediately following at the Athy Memorial Home, 111 Lancaster St., Worcester. Burial will be private.