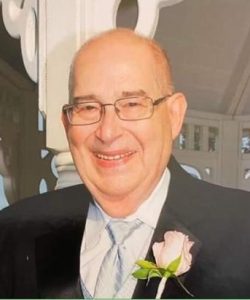 From a very young age, Billy could be found behind the counter of the family store, The Clifford Spa, on Blue Hill Avenue in Roxbury. He would enthusiastically assist his neighbors with their groceries, cook and serve at the lunch counter, or whip up an ice cream soda.

He joined the U.S. Army in 1961 and met the love of his life, Ellen Connell, on a blind date, that same year. The two of them quickly became inseparable and married in 1963. Bill was a truck driver for The Boston Globe for 30 years and a proud Teamster, Local 259. They raised their four children in Malden and resided there until 1997 when they decided on an early retirement and moved to San Jose, CA. The years on the left coast were an invigorating time full of travel and reconnecting with each other, even spontaneously getting hitched again on a beach in Maui.

A Massachusetts homecoming happened in 2005 and thrilled their children and growing group of grandchildren.
Bill and Ellen shared 48 years of marriage, until her passing in 2011.

He is survived by his four children: Patricia Johnson-Dilkey of Chelsea, William Johnson and his wife, Michelle, of Nashua NH, Thomas Johnson and his wife, Lynn, of Holden, and Kathleen Johnson of Somerville.
Grandpa will be missed by his nine grandchildren: Sean, Ryan, Eric, Christopher, Abigail, Trevor, Ellirene, Veronica, and Presley, as well as by his three great-grandchildren: Emma, Ethan, and Julian. He also leaves behind his sisters: Janice Eden of Springfield IL, Jean Ball of Auburn IL, and his brother-in-law, Michael Connell of Maricopa AZ.

Bill will be greatly missed by his companion of these last several years, Gloria Holmes of Holden. Honoring Bill s wishes, cremation has taken place and a private graveside service will be held at a later date.