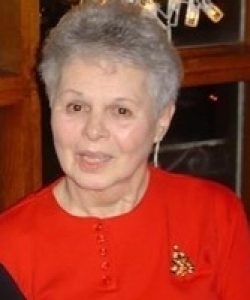 Section Garden of Heritage I Lot Number: 240Grave Number: B#4

Barbara A. (Miller) Adams, 83 of Worcester passed away peacefully Friday, December 22, 2017 joining in heaven her daughter Deborah who passed away on October 23, 1998.

Barbara was born Worcester, on June 1st 1934, the daughter of Joseph R. and Charlotte (Phelps) Miller. Raised in the Miller compound on North Lake Ave, in Worcester, Barbara graduated from Commerce High School with a focus on Business.  At the age of 20 on November 20th 1954, Barbara married Paul H. Adams, the love of her life for the next 63 years and built their home alongside her family the Miller’s to raise their two daughters.   She has lived in Worcester all her life.

Barbara worked as a secretary / bookkeeper all her life for various companies as well as the Worcester County Sheriff’s Department, Shrewsbury Bank and Trust and Iandolis markets.

Barbara was a lifetime member and past volunteer of the friends of Monson Development Center and the former St Margaret Mary Church.  She enjoyed antique jewelry and traveling the United States with Paul.

Friends and relatives are invited to a period of calling hours Thursday, December 28th from 9:30 am to 11:00 am in the MERCADANTE FUNERAL HOME & CHAPEL, 370 Plantation St followed by her funeral service at 11:00 am.  Burial with her daughter Deborah will be private.  In lieu of flowers memorial contributions may be made to  The Sunshine Village, 4 Springfield St., Three Rivers, MA 01080