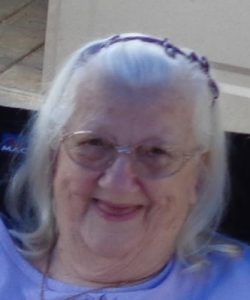 Anna C. “Anna Banana” (Colby), Latendress, 81, of Worcester, passed away peacefully on Friday, November 22, 2019 in her home with her family by her side after a brief illness.

Anna was married to the late Edward Latendress who passed away in 1988. She is survived by her son, Donald Latendress; her two daughters, Robin Latendress and Irene Latendress all of Worcester; her brothers, Ira Colby, Sidney Colby, Bobby Colby and John Colby all of Worcester; Urgel Lapierre, Wesley Jon Lapierre and John Paul all of Florida; her six sisters, Mary Jane McGrath of Georgia, Gloria LaPrade of Worcester, Julianne Sanford of New York, Shirley Webster of Webster, Charlene Langlois of Leicester, Nanette LaPierre and Michelle LaPierre both from Florida; 9 grandchildren; 8 great grandchildren and many nephews and nieces along with many Godchildren.

Anna Banana was born in Northbridge, daughter of the late Ira and Josephine (Higgins) Colby and is also predeceased by two sons, Joseph and Thomas Latendress; two daughters, Carrie Toupense and Laurie Stokes; five sisters and one brother.

She was a lovely woman that enjoyed spending time with her family and friends and everyone knew not to bother her while she was watching her favorite television show, “NCIS Los Angeles”.

Memorial calling hours will be held on Tuesday, December 17th from 5 to 7 in the Alfred Roy & Sons Funeral Home, 12 Hammond St. Worcester. A Funeral Mass will be held from the funeral home on Wednesday, December 18th at 10 AM in the Cathedral of Saint Paul, 15 Chatham Street, Worcester. Burial will be at a later date in Worcester County Memorial Park, Paxton.